- February 09, 2020
For the week ending February 17th, 1980: Ernie Ladd and Iron Mike Sharpe each try to beat the other to become "champ-champ", a number of wrestlers from outside the territory work a show in Biloxi & more! 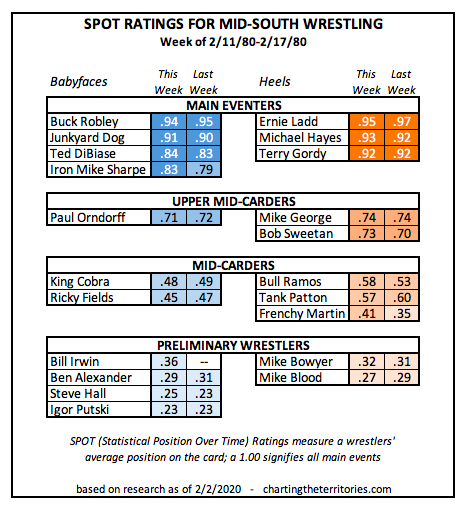 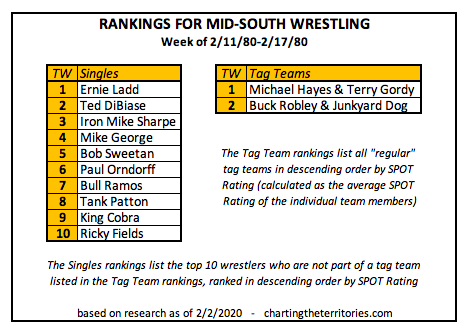 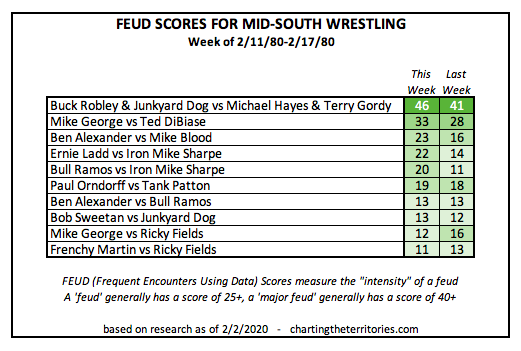 Other wrestlers advertised for shows this week but not listed in the SPOT ratings: Charlie Cook, The Gladiator, Jerry Oates, The Masked Superstar, The Mongol, Randy Rose, Terry Orndorff, Tommy Rich, Tony Atlas and Tony Charles. Most of these wrestlers worked the Saturday night show in Biloxi, as Watts had two "A towns" booked that night. Rich & Atlas were in Georgia at the time while Rose, Charles and Terry Orndorff were in Southeastern. The Mongol was presumably either Tio or Tapu, who were also in Southeastern teaming up as The Mongolians. I'm assuming that The Masked Superstar was indeed Bill Eadie, though he was in Mid-Atlantic and worked Norfolk the night before and Charlotte the night after. The Gladiator was not Ricky Hunter, as he was in the AWA.

Charlie Cook finished up this week and then goes to Southeastern. The lone newcomer on the full-time roster is Bill Irwin, who came in from Tri-State. I have Irwin slotted on the babyface side, as all of his opponents this week are heels and he teamed with Ricky Fields in Baton Rouge. Over the next couple of weeks, however, it appears he is repositioned as a heel.

The top feud continues to be The Freebirds against the team of Buck Robley & Junkyard Dog, followed by Ted DiBiase vs Mike George. Iron Mike Sharpe is feuding with both Ernie Ladd and Bull Ramos. Ladd isn't here every night of the week, he's also working big shows in Florida and some other territories. Ladd and Sharpe have title matches this week for two different belts; Ladd is the Louisiana state champion while Sharpe is the Mississippi state champ.

While Paul Orndorff is clearly being pushed as a babyface, there is a logjam of sorts with four other babyfaces above him in the SPOT Ratings. His most frequent opponent at the moment is Tank Patton, so they're still building him up and we will have to wait and see if/when he moves up into the Main Eventer category.