- February 17, 2020
For the week ending February 20th, 1972: World champ Dory Funk Jr faces Bill Watts in Shreveport, Great Mephisto on the way out, Dale Lewis on the way in, Ken Mantell on the way up & more! 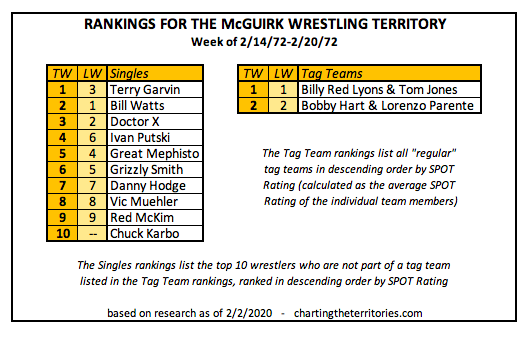 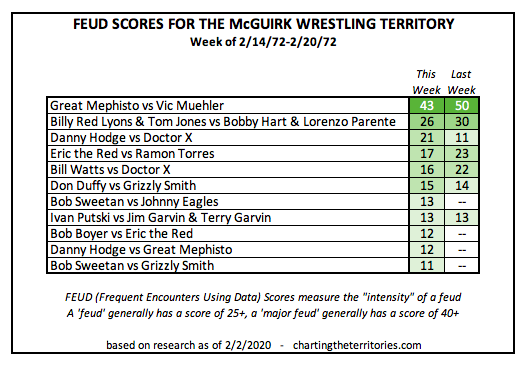 Other wrestlers advertised for shows this week but not listed in the SPOT ratings: Dory Funk Jr, Jim Garvin (primarily working as Terry Garvin's manager), Ken Nichols and midget wrestlers Farmer Pete and Little Bruiser. Dory, the NWA World Heavyweight champ, came in for about a week. His first appearance was on Sunday the 20th in Shreveport, defending the title against Bill Watts. Results from the show indicate that Watts won the first fall but was injured during the second fall (he "ran into a ring post and received a concussion") and had to forfeit the bout. This was almost certainly an angle and not a legit injury, as they did pretty much the same thing the next night in Tulsa.

Dale Lewis debuts on the roster this week. It should be noted that his first advertised booking was in Shreveport this Sunday, but he did not appear on the card and was replaced by Ken Mantell. He does show up here next week. Dale had been here in the fall, and spent about a month in Japan for the JWA before returning here. Lewis represented the U.S. in the 1956 and 1960 Olympics, competing in Greco-Roman wrestling as a heavyweight. He's a babyface at the moment, but after a month or so he turns heel.

Terry Garvin leapfrogs Bill Watts and Doctor X and has the highest SPOT Rating in the territory this week. His feud with Ivan Putski led to a couple of handicap matches in Shreveport and Hot Springs, with Putski facing both Terry and his "younger brother" Jim Garvin. This feud also moved Putski up the rankings, as his SPOT Rating increased from a .85 to a .89 and he's now ranked #4. In the lower portion of the cards, Ken Mantell moves up, with his SPOT Rating increasing from a .41 to .48 this week.

The top feud continues to be between former partners Great Mephisto and Vic Muehler (aka Vic Rossitani). Their feud peaked last week, as the FEUD Score drops from a 50 to a 43. Mephisto finished up in the territory this week; he has a few matches against Muehler including a lumberjack match in Baton Rouge and a steel cage/no DQ match in Lafayette. Mephisto also faces Danny Hodge in a loser leaves town match in Tulsa. The tag team feud between Billy Red Lyons & Tom Jones and Bobby Hart & Lorenzo Parente is the second biggest feud, while Danny Hodge and Doctor X occupy the third spot. Hodge lost the NWA World Junior Heavyweight title to X back in December. X then feuded with Ramon Torres for a few weeks, followed by a series of matches against Bill Watts.

NOTE: You'll see a card for Vicksburg listed below along with all the other known weekly cards. I added over 350 new house shows to my database this past week, mostly from the Mississippi towns of Vicksburg, Meridian and Natchez. I currently run all my statistics on a quarterly basis; this means that these "new" shows won't be part of the dataset used to calculate the SPOT Ratings, Rankings and FEUD Scores until the first week of April.