- January 06, 2020
For the week ending January 13th, 1980: Trying to pinpoint the date of a title change, The Cuban Assassin debuts although he's really just A Cuban Assassin & more! 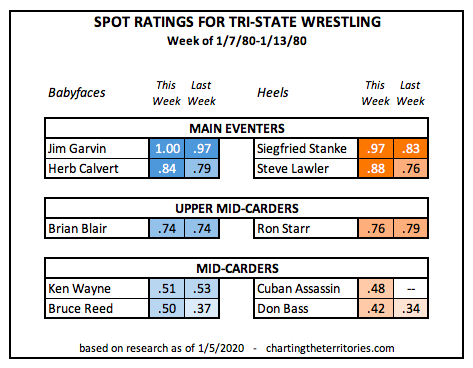 Other wrestlers advertised for shows this week but not listed in the SPOT ratings: Bill Ash and Kenny Milsap.

The only newcomer this week is The Cuban Assassin. This doesn't appear to be Angel Acevedo or David (Fidel) Sierra, as Acevedo is in Calgary and Sierra is in Mid-Atlantic (as David Patterson) at the time.

The US Tag Team titles switched hands either this week or within the last couple of weeks. Siegfried Stanke & Steve Lawler defeated Herb Calvert & Jim Garvin for the belts. Looking at the online sources for title histories that I frequently use for reference, they list the change as happening in December with the exact date and location unknown. While Stanke did come in for a week in December, he's not in full-time until this week. I'm not sure what the promotion did for TV at this time, so it's possible the change occurred at a TV taping in December. If not, the change would likely have happened this week, with both Tulsa and Springfield being possibilities.

Oki Shikina left the territory. He next shows up very briefly in Georgia, then goes to Amarillo in March.