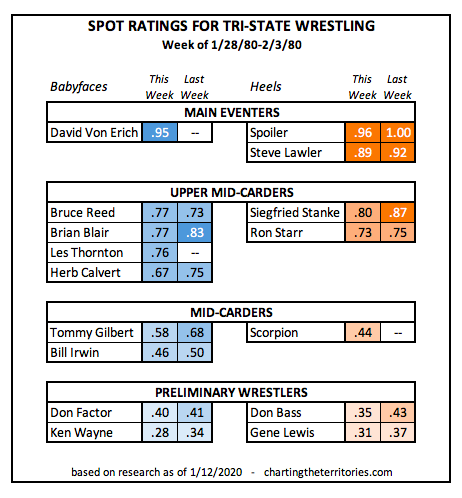 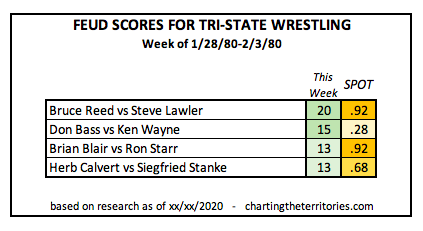 David Von Erich and The Spoiler, while technically not full-timers, are here often enough to be listed in the SPOT Ratings. The same goes for Les Thornton; like Von Erich and Spoiler, he is wrestling regularly in East Texas but making shots here on many Mondays and Fridays. Thornton will be here for several weeks; next week they finally begin to wrap-up the Junior Heavyweight title tournament that started way back in the fall with a sporadic series of elimination matches.

The Cuban Assassin finished up in the territory last week and is replaced on the heel side by The Scorpion (identity unknown).

Now that I have lineups and/or results from 3 or more shows per week, we can take a look at the FEUD Scores to see what some of the more frequent matches are around the loop. Bruce Reed is wrestling Steve Lawler on a regular basis; we can see Reed continuing to move up the cards, reflected in his SPOT Rating. Over a four-week period of time, Reed has gone from a .37 all the way up to a .77 this week, a clear sign of him being put higher up the cards.