- January 20, 2020
For the week ending January 27th, 1980: The Von Erichs and The Spoiler make appearances, young Bruce Reed starts to move up the cards & more!

Here's a look at the talent roster along with SPOT ratings for the week. Starting next week, we will also look at the weekly FEUD Scores. 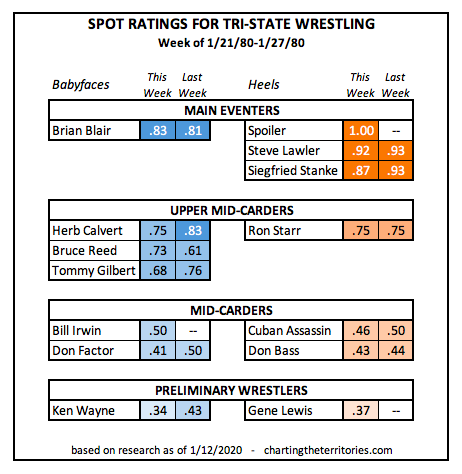 Other wrestlers advertised for shows this week but not listed in the SPOT ratings: David Von Erich, Kenny Milsap, Kerry Von Erich and Scandor Akbar. The Von Erichs worked in Tulsa this week, coming in for the one shot from East Texas.

With The Spoiler (Don Jardine) working on cards in both Tulsa and Oklahoma City over the next few weeks, he makes enough appearances to be included in the SPOT Ratings. As with the Von Erichs, he's a regular in East Texas but coming in for occasional shows here.

Newcomers this week are Bill Irwin and Gene Lewis. Irwin had been in Florida in late 1979 and did a tour for All Japan at the beginning of 1980. Lewis' last regular gig was with Mid-South in late '79, though he may have made an appearance or two for Mid-Atlantic in early 1980.

Bruce (aka Butch) Reed starts to get a push here, with his SPOT Rating increasing to a .73 this week.