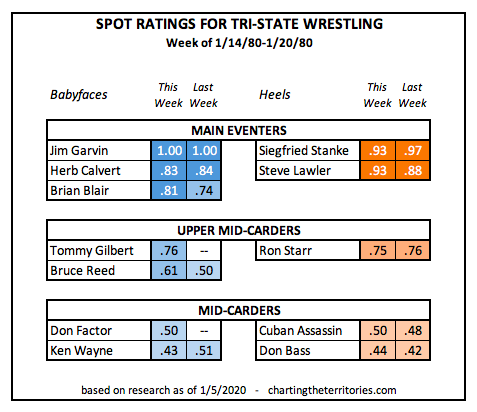 Other wrestlers advertised for shows this week but not listed in the SPOT ratings: Bill Ash, Dick Murdoch, Jim Marshall, Kenny Milsap and The Spoiler (Don Jardine). Murdoch and the Spoiler were booked against one another in Oklahoma City. Spoiler came in from East Texas while Murdoch was working all over the place; in January alone he worked in Amarillo, Detroit (for The Sheik), East Texas and St. Louis/Central States.

Newcomers to the SPOT Ratings this week are Don Factor and Tommy Gilbert. Tommy had most recently been working for George Gulas.