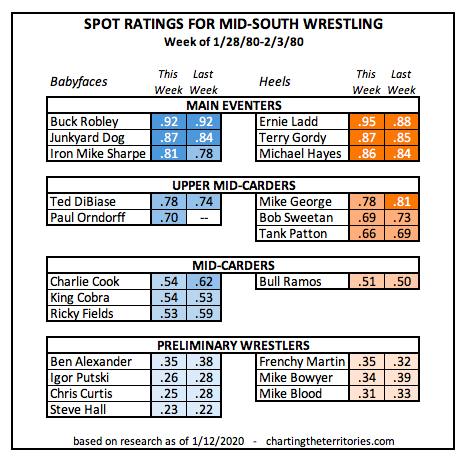 In what is probably the ultimate sign that Bill Watts was confident in the abilities of his roster, he took himself off the road this week. In fact, aside from working one show in Florida in February, Watts doesn't appear to set foot in the ring again until August. He now has a roster of young, hungry and talented wrestlers, with crafty vets such as Buck Robley and Ernie Ladd there to guide them not only in the ring but likely behind the scenes as well.

Ox Baker finished up his brief run in the territory. After working a handful of shows in East Texas, Ox then went to Mid-Atlantic. His run here was pretty much solely to build up Ted DiBiase and get him ready for a big run. That big run took a giant step this week, as DiBiase defeated Mike George on Friday in Shreveport to win the North American title.