- January 15, 2020
For the week ending January 20th, 1980: "Big Cat" Ernie Ladd becomes the lead heel, lots of stipulation matches including two lights out matches and a "piledriver match", a look at the ages of some of the wrestlers at the top of the cards & more! 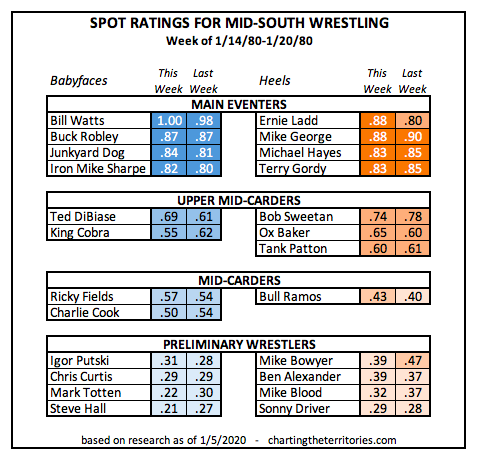 Other wrestlers advertised for shows this week but not listed in the SPOT ratings were midget wrestlers Cowboy Lang and Little Tokyo, who came in over the weekend and stayed through the following week.

There were no other changes to the roster this week. It should be noted that Ernie Ladd is splitting his time wrestling here and in Florida; based on the criteria I use to separate "regulars" from part-timers, he does qualify as a regular here, but just barely. He also leapfrogs over Mike George and The Freebirds to become the top-ranked heel; his SPOT Rating this week is higher than George's by a very slight margin. Ladd defeated Iron Mike Sharpe in Shreveport on Friday to win the Louisiana Heavyweight title. Sharpe is advertised for a title defense two nights later in Houma (and the ad ran the day of the show); I don't know if they acknowledged the title change at the show or if they waited until it was acknowledged on television.

Also seeing a big increase in SPOT Rating is Ted DiBiase, who jumps from a .61 last week to a .69 this week (and two weeks ago his SPOT was .54). There's definitely a movement towards younger stars in the upper portions of the cards. Looking at the ages of the top wrestlers here at this point in time, JYD and DiBiase are in their mid-20s. Hayes is 20 and Gordy is 18. Iron Mike Sharpe is 29 and Mike George is either 29 or 30, while Bob Sweetan and Buck Robley are in their late 30s and Bill Watts and Ernie Ladd in their (very) early 40s. Just four months earlier the top half of the roster skewed significantly older, including three other wrestlers in their 40s (Jose Lothario, King Kong Mosca and Mr. Wrestling II).