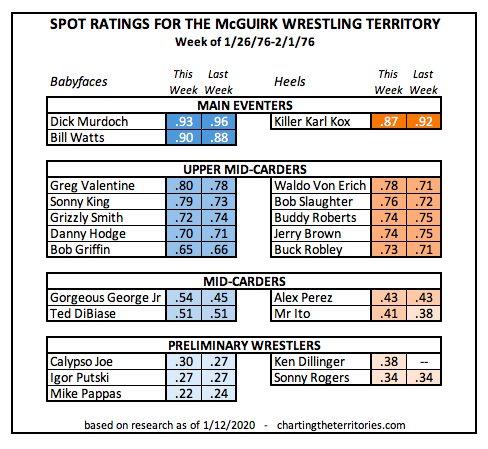 Other wrestlers advertised for shows this week but not listed in the SPOT ratings: NWA World Heavyweight champion Terry Funk, Charlie Fulton and Joe Turner. Funk, who defeated Jack Brisco for the title a month and a half earlier, came in for five nights and faced four different opponents. He faced Dick Murdoch in Tulsa and Shreveport, Danny Hodge in Fort Smith, Greg Valentine in Chalmette (the newspaper article does not explicitly list this as a title bout, but it probably was) and Bill Watts in Lafayette. The only results I have were for the two Murdoch bouts, both of which ended in draws (with Shreveport being a one-hour time limit draw and Tulsa likely the same but the newspaper only states they battled "to a draw").

Haystack Calhoun finished up his run here and went to Mid-Atlantic for a few weeks. He would come back for another brief stint in early 1977. The one newcomer this week was Ken Dillinger. He had been working for Gulas in the fall of '75.

The two biggest movers up the cards this week were Waldo Von Erich and Gorgeous George Jr. With the Murdoch-Kox feud finally cooling off sightly, some new feuds started to heat up. George & partner Greg Valentine began feuding with Buddy Roberts & Jerry Brown, while Bill Watts and Waldo Von Erich faced off on a more frequent basis. The feud between Bob Slaughter and Sonny King continued to heat up as well, with a FEUD Score of 40. They main-evented Alexandria and Houma this week, with the matches often being billed as a battle of finishing holds, Slaughter's being the claw hold and King's being a headbutt.

With regards to George & Valentine, they are billed as the new US Tag Team champions beginning this week. As recently as the previous Thursday, Valentine & Bill Watts were the champs of record. Title history listings have Watts being "injured" and Gorgeous George replacing him as Valentine's partner. Looking at house show results, it doesn't appear Watts missed any of his advertised bookings, so this was likely a television angle. Knowing how the territory was generally booked, this is my guess: Watts & Valentine are advertised for a title defense on TV against Roberts & Brown; Waldo Von Erich attacks Watts early in the show, "injuring" him; Valentine is allowed to pick a new partner and chooses George, with them winning the bout. Greg & George are billed as champs this week in Monroe, but not in Shreveport.