- January 20, 2020
For the week ending January 25th, 1976: with Matsuda not booked regularly in the area the heavyweights dominate the top spots on the cards as well as the biggest feuds & more! 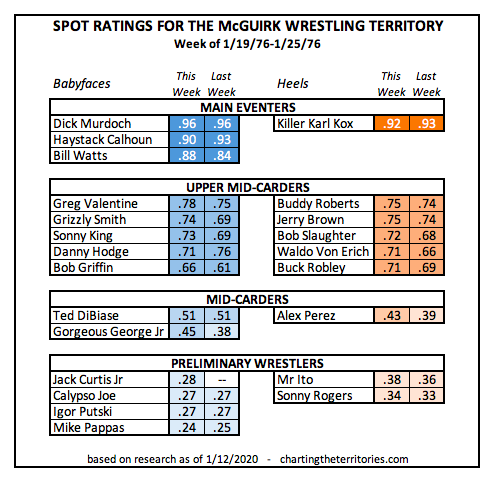 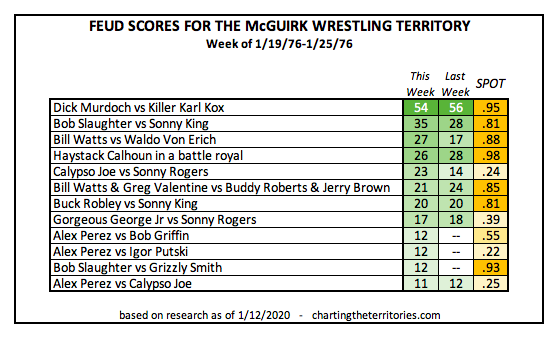 Other wrestlers advertised for shows this week but not listed in the SPOT ratings: Hiro Matsuda. Matsuda was booked to defend the NWA World Junior Heavyweight title on Tuesday in Alexandria and then disappears for a few weeks. The only booking I can find for him during that time away is on February 3rd in Tampa.

Jack Curtis Jr, who is booked here regularly but often as a part-timer, has enough matches over a few week period of time to be included in the SPOT Ratings this week. To make my life easier when putting these charts together, I have a set formula I use to separate "regulars" from "non-regulars". Unfortunately, part-timers such as Curtis (or Tom Bradley in 1972 or Red McKim at various points in time) often can drift back-and-forth between qualifying as regulars and non-regulars, but it's a necessary evil at this point in time.

The Invader left the territory this week. As stated previously, this couldn't have been one of the more notable wrestlers to have used the Invader name over the years, and his identity is unknown.

With Matsuda not in the territory full-time, Danny Hodge was significantly cooled off over the last several weeks. He's still a key player in the territory, but there are several babyfaces higher up on the depth chart. Much of the emphasis at this point in time was on the heavyweights, with the Dick Murdoch-Killer Karl Kox feud still raging on and Bill Watts feuding with Waldo Von Erich. In addition, the Bob Slaughter-Sonny King feud is still going strong; both men see an increase in their SPOT Ratings this week.