- January 19, 2020
For the week ending January 23rd, 1972: one tag team feud heats up while a feud between former tag team partners kicks off, the debut of a future World Junior Heavyweight champ & more! 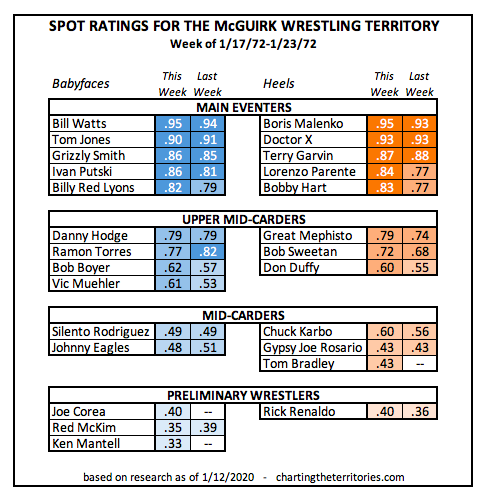 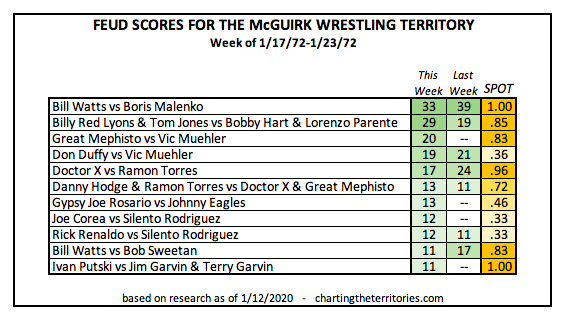 Tom Bradley, who was wrestling here part-time as well as refereeing on occasion, had enough matches over a several week period to be listed in the SPOT Ratings. The two newcomers to the territory this week were Joe Corea and Ken Mantell. Corea, sometimes billed as Joey Corea, had been wrestling for Gulas before coming here. He also used the ring name El Olympico in the WWWF for a few years. Mantell came here from Florida, where he spent most of 1971 wrestling as Ken Lusk. His pro debut was in late 1970 in East Texas.

Looking at the FEUD Scores, the feud between the teams of Billy Red Lyons & Tom Jones and Bobby Hart & Lorenzo Parente heats up and the feud between former partners Great Mephisto and Vic Muehler starts up. The Watts-Malenko and Doctor X-Ramon Torres feuds were cooling down. Malenko is on his way out of the territory, while Torres is being moved down the cards. Torres' SPOT Rating falls from a .82 to a .77, moving him down to the Upper Mid-Carder category. Red Lyons, Hart and Parente all move up into the Main Eventer category.

Friday - Lafayette, LA
-Bobby Hart & Lorenzo Parente vs Ivan Putski & Ramon Torres
-Grizzly Smith vs Rick Renaldo*
-Bob Boyer vs Joe Corea
*this was billed as a handicap match in the newspaper ad; that might refer to a stipulation where one opponent has to win in a certain amount of time else they are deemed the loser