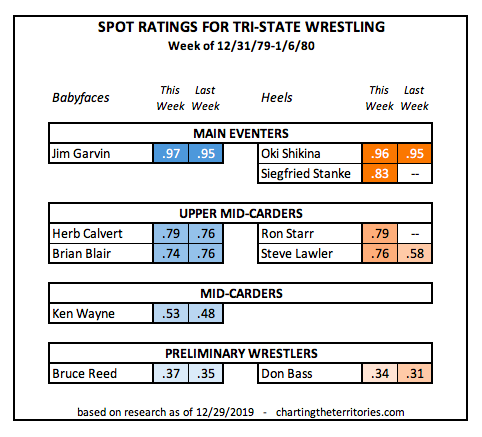 Other wrestlers advertised for shows this week but not listed in the SPOT ratings: Jack Kruger, Justin Gross and Scandor Akbar.

Ron Starr returned to the territory after going to Portland over the holidays. Siegfriend Stanke was added to the SPOT Ratings chart this week. Stanke had been wrestling for All-Star (Vancouver); he actually started here in mid-December but took a couple weeks off for the holidays before becoming a regular.

Due to the low number of shows I have records for at this time, I am not listing FEUD Scores, as there just isn't enough data for them to be meaningful. By mid-February there should be enough data to start listing them again.

(given that Shikina leaves the territory after this week and Garvin stays, it's a reasonable assumption to say Garvin won both of the loser leaves town matches)