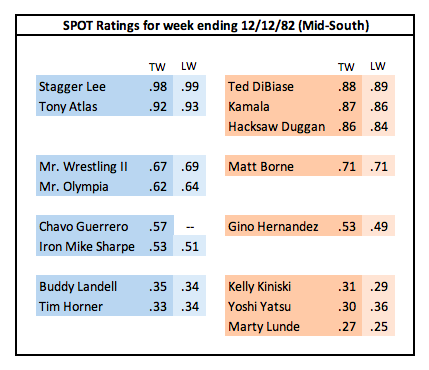 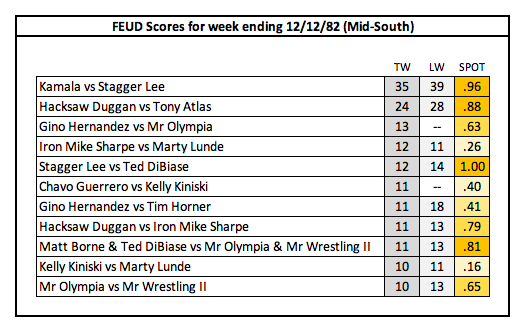 Other wrestlers advertised for shows this week but not listed in the SPOT ratings:
The Grappler & Grappler II, John & Rick Davidson, Tiger Conway Jr and Tully Blanchard

The only newcomer this week was Chavo Guerrero. Chavo returned to the SPOT ratings this week after not having any bookings in the area last week.

Removed from the SPOT chart this week was Hiro Matsuda, who left the territory. This marked the end of Matsuda's career as a full-time active wrestler. He did do one tour for New Japan in 1984 and worked as a manager (notably for Lex Luger) in 1987. He had occasional matches here and there between late '82 and '87, but this was his last run as a regular wrestler in the U.S.

The FEUD Scores this week are a little bit lower across the board than they have been. The promotion appears to have taken a break over the Christmas holidays, perhaps as many six days with no shows. Since FEUD is based on a rolling five-week period, the next several weeks have a smaller data set due to this, so the numbers will be a lower.