- December 15, 2019
For the week ending December 23rd, 1979: No house shows this week due to the holidays so we take a detailed look at how Junkyard Dog's babyface turn played out on TV & more! 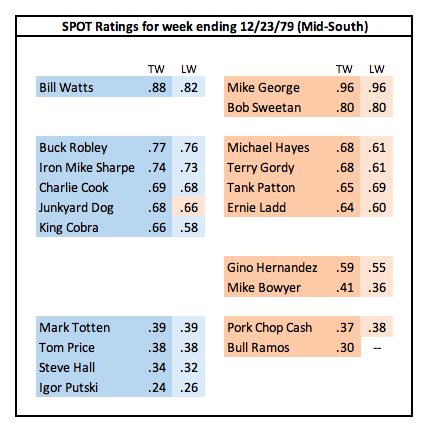 The only newcomer to the SPOT chart this week is Bull Ramos. Ramos had been in Southern California for a few months, then did two very brief stints in Portland and East Texas before starting here.

Leaving the territory were Dizzy Golden, Gene Lewis, Jerry Oates, Jonathan Boyd, Ken Patera, Mr Wrestling II and Stan Hansen. Golden (Ed Leslie) goes to Southeastern in January, where he works as Eddie Boulder. Lewis' next stop as a regular is Tri-State in late January. Oates makes appearances in Central States, Georgia and Detroit over the next few months. Boyd goes to East Texas. Patera starts on the road with the WWWF. Wrestling II goes to Georgia. Hansen goes to New Japan.

While traditionally there is some roster turnover at the end of the year for many territories, this does seem to be a larger exodus of talent than normal. Generally, some wrestlers leave the territory they're working in right before the holidays, often to return home. Shortly after the new year, they would start fresh in a new territory. In this case, Watts' crew had grown substantially in size ever since he split from McGuirk. While a few new faces do start in the beginning of 1980, the crew stays a little bit smaller than it had been.

With the holiday season approaching, it appears that the territory took nine days off, with no shows between December 16th and the 26th.

The angle to turn Junkyard Dog babyface aired somewhere around this time (varying from TV market to TV market). Here is a description of how the turn played out from Brian Ockman, who has provided me with a good bit of info about the TV tapings from this time period.

Brian runs a great Facebook group entitled "Mid South Wrestling Universe Appreciation" if you're interested in learning even more about the territory.

JYD and Gino Hernandez had formed a team on TV, with Gino referring to them as Beauty & the Beast (with JYD thinking HE was the "beauty"). They teamed up a few times on house shows, but JYD was also facing Buck Robley in singles bouts around the horn. Gino then announces on TV that he is dumping JYD as his partner in favor of Ernie Ladd, and they issue a challenge for JYD to find a partner and take them on. The only partner JYD can get is young prelim wrestler Tom Price. During the match JYD gives Gino the big thump and throws Price on top of him for the victory. Later in the same episode, the Freebirds are giving Buck Robley a beatdown and JYD comes out for the save.  JYD later says he gained a lot of respect for Robley after wrestling him, with Robley saying that he doesn't trust JYD fully but will team with him and keep an eye on him.

This is pretty typical of the angles that Mid-South is best known for (Bill Watts, Ernie Ladd and/or Buck Robley likely crafted this one) in that there were multiple layers involved. Here, JYD ends up having beef with Gino, Ladd and the Freebirds, so taking on any of them at a house show has a built-in storyline. And of course him saving Robley gives him a new tag partner for matches, but they can easily shift the emphasis to Robley & any partner vs the 'Birds or JYD & any partner vs the 'Birds.