- December 23, 2019
For the week ending December 29th, 1968: Sputnik Monroe becomes top heel, Ronnie Reed is about to start in a new territory and take on a new ring name, blindfold battle royals & more! 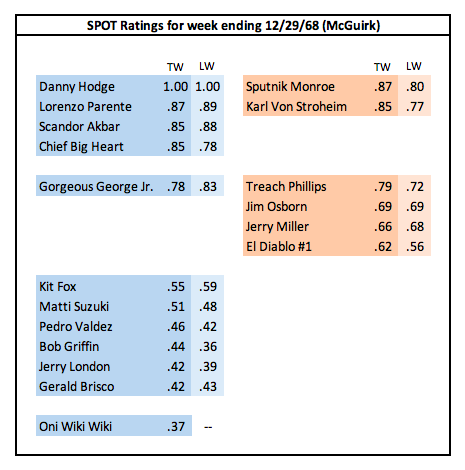 
The only newcomer this week is Oni Wiki Wiki. He had been working in the lower Louisiana circuit, wrestling and refereeing part-time while also being part of the "office". Him coming up here and working for McGuirk likely indicates that he is no longer involved in that circuit, furthering the notion that they are now a completely separate entity. Women wrestlers Betty Niccoli and Jean Antone also come in to work at least one show this week.

Leaving the territory were Jack Donovan, Ronnie Reed and Tom Bradley. Bradley goes to Florida; he would return here in 1971 to finish out his 25-plus year career. Donovan went home for the holidays. He comes back to work a couple of shows in January, then isn't seen again until April when he starts teaming with Jerry Brown. Ronnie Reed also goes home for the holidays, and works at least one show here in early January before going to Amarillo. With the new territory comes a new ring name, and from that point forward Reed would be known as Buddy Colt. And the rest, as they say, is history.