- December 15, 2019
Here’s a “Deep Dive” where I take a look at Dusty Rhodes in 1971 when he worked for the McGuirk/Watts wrestling territory.

NOTE: I originally posted much of this in December 2019. It has been updated on 7/5/2020.
Dusty’s first and only full-time stint for McGuirk/Watts began on April 12th in Tulsa, where he faced Sputnik Monroe (it should be noted that he worked one or two shows for McGuirk in January). He stayed through late November, with his last known booking on November 25th in Chalmette, LA against Ivan Putski. After that, he went to Japan for IWE, then returned to work a couple of shows after Christmas before heading to the AWA full time.
Using the two statistics I have developed, the SPOT Rating and FEUD Score, we can evaluate his time I the territory, seeing where he was placed on the cards and who he feuded with.
SPOT (Statistical Position Over Time) Ratings measure a wrestler's average position (or spot) on the cards. Keep in mind that in the territorial era, cards were structured and promoted in a very specific way, with the main event being the most important match on the card, and the opening match being the least important. Based on the # of matches on each card and where a certain match is listed on the card, we can come up with a numerical value of a wrestler's position.
SPOT is a number between .00 and 1.00, with 1.00 being the highest possible score. I calculate a "weekly" SPOT Rating for wrestlers using all of their known bookings for a rolling, weighted five-week time period.
A Main Eventer has a SPOT Rating above. .80
An Upper Mid-Carder has a SPOT Rating between .60 and .80
A Mid-Carder has a SPOT Rating between .40 and .60
A Preliminary Wrestler has a SPOT Rating below .40
FEUD (Frequent Encounters Using Data) Scores measures the "intensity" of a feud. It is based on both the number of times a specific match takes place and the breadth of when those matches occur. Like the SPOT Rating, I used a weighted, rolling five-week time period to calculate a weekly FEUD Score.
A general rule of thumb is a FEUD Score of 25 and above is considered a "feud" and a Score of 40 and above is considered a "major feud".
The following chart looks at Dusty's SPOT Rating and FEUD Scores over the course of his stay in the McGuirk/Watts territory.

Dusty spent the first few weeks in the middle of the cards, but by mid-May his SPOT Rating crosses the .80 threshold and he stays above that mark for the rest of his run here. His SPOT Rating peaks at a .99 for a few weeks in August.
The second half of the chart allows you to see the opponents he faced the most, and you can also see when those matches occurred. His primary opponent for the first few weeks was Sputnik Monroe. As we get to the end of May, he starts facing wrestlers such as Grizzly Smith and Bill Watts. Going into July, he starts a (heel vs heel) feud with the Spoiler that reaches "major feud" status with a peak FEUD Score of 52. After that he faces Watts again several times and then begins a feud with Dale Lewis. He follows that up with another series of bouts against Watts and then a feud with Ivan Putski. That feud has a peak FEUD Score of 57 in mid-November and is Dusty's last feud before leaving the territory.

Dusty did defeat Watts for the North American title. The major title history sources list the change as having occurred on May 21st in Shreveport. The weekly house show in Shreveport was on the 17th that week, and Watts was billed as champion going into that match. Dusty is listed as having won, but it is unknown if the title changed hands (or if he won by disqualification or other means). On May 14th in Oklahoma City, Watts is advertised as defending the title against Dusty. Results in the Saturday newspaper, however, say that Dusty faced Danny Hodge instead, going to a time limit draw. To make things even more confusing, an article in the Sunday OKC newspaper (promoting the following week’s show) says that Dusty actually did win the title from Watts on the show on the 14th. So there either was some sort of miscommunication between the promotion and the newspaper or something else happened. It is also possible that Dusty was "supposed" to have won the title from Watts on the 14th but Watts didn't make the show and they did a match with Hodge instead. In this scenario, perhaps results were sent to the paper in advance of the show (which was known to happen), the corrected results were sent in late Friday or early Saturday but the article in the Sunday paper with the original copy slipped through the cracks. Taking that scenario a step further, it's possible that they then did the title switch on the 17th in Shreveport.

Title history sources list Watts as regaining the title sometime in October. An article on October 10th in Shreveport promoting the following night’s card says that Watts regained the title “three weeks ago” in Jackson MS. This would likely have been the September 22nd show there, where Dusty defended the title against Watts in a match with no disqualifications, no countouts and no time limit. It should be noted that Dusty is billed as champion on at least one occasion in other towns the week after September 22nd. 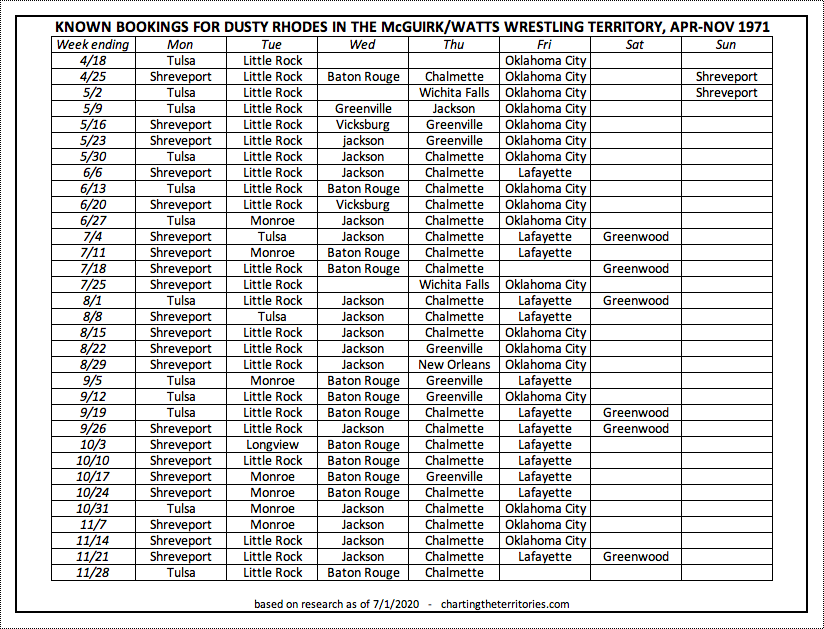 The above chart shows the towns that Dusty was booked into. The territory generally ran 2-3 shows per night during the week, sometimes two larger towns and sometimes one large town and two smaller towns. On Saturdays, it seemed they ran smaller towns. I think much of the top talent were taping TV somewhere. In the late 60s, they taped TV on Saturday nights in Oklahoma City, so it's possible that was still the case here. Dusty generally worked the larger towns, in particular note on Thursdays where he almost always is in Chalmette (which was part of the New Orleans market) instead of smaller towns Wichita Falls and Greenville. On nights where they ran two larger towns, Dusty's bookings are generally split fairly evenly between the two towns. 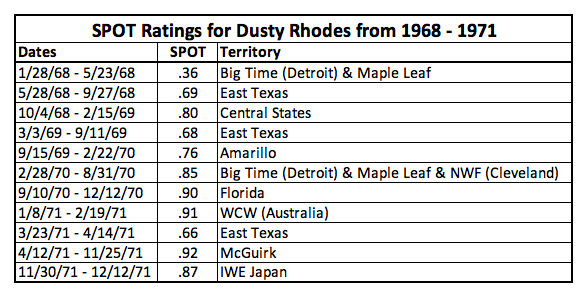 You can see Dusty started out in prelims in Detroit & Toronto. When he went to East Texas, he was given a little push and moved up the cards. He then went to Central States, where he (just barely) crossed the threshold to be considered a main eventer. He returned to East Texas in a similar spot as before, then went to Amarillo and was pushed a little bit stronger, though still considered an upper mid-carder. He returned to Detroit & Toronto (and also worked Cleveland) and was booked as a main eventer. From there he went to Florida where he was pushed strongly in main events. A brief tour of Australia continued to see him booked high on the cards. Returning to East Texas for three weeks, he was kept in the same upper mid-card spot he occupied in previous stints in that territory. Then he goes to McGuirk where he again is booked strongly in main events. He finished up 1971 with his first tour of Japan (for IWE), again being booked as a main eventer.
Dusty Rhodes