- November 08, 2019
Our coverage of 1961 continues with a look at the week ending November 12th: McGuirk pulls out of (most of) Louisiana, The Great Antonio returns and is featured in several battle royals, a note about our coverage of 1961 going forward & more! 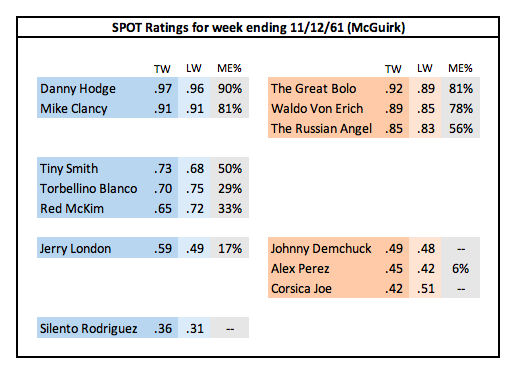 Notes/Analysis: After spending a few months sending his talent to several Louisiana towns on a weekly basis, Leroy McGuirk and his crew stop working those towns this week. They do stay in Shreveport and return to Monroe in early December. Baton Rouge and New Orleans, however, go dark for about a month, at which point the local promoters in those two cities and Alexandria (and probably a couple of other towns in the state) start using wrestlers sent by Jack Pfefer. That doesn't seem to last very long, and the lower half of Louisiana eventually becomes part of Gulf Coast. Besides Shreveport and Monroe, which remain weekly towns for McGuirk for many years, he doesn't attempt any further inroads into the state until 1968.

With the loss of those towns, the crew working in this territory gets a little smaller. Whereas there had been approximately 16-18 wrestlers that would be considered "full-timers" for the last couple of months, that number decreases to about 12-14. For this reason, and due to time constraints on my part, this will be the last weekly look at 1961 for the time being. I still update the blog 4 times a week with updates for 1982, 1979, 1975 and 1968. Starting in January, I will be coming back to the early 1960s, but will present things in a different way.

Many of the cards this week were headlined by battle royals. To "beef up" the cards, McGuirk brought The Great Antonio in for the week. Also coming in this week was Sascha the Great. Sascha had just finished up in Amarillo, and would start in Central States the following week, so this was just a waypoint in between those two stints. I believe that Sascha is the same wrestler who later worked here as Nikita Mulkovich.

In the promotion for the battle royals, which were Russian roulette style in that the royal went on first and the matches that took place afterwards were determined by order of elimination, much attention was given to three of the larger men in the territory. Ads and articles in Tulsa, Springfield and Oklahoma City all make a point of listing the weights of Great Antonio (450 pounds), Tiny Smith (315 pounds) and The Russian Angel (250 pounds). Interestingly enough, Antonio and Tiny were the first two men eliminated from the Springfield battle royal. Mike Clancy won that battle royal, while Waldo Von Erich won in Tulsa and Oklahoma City. In Fort Smith, the battle royal did not feature any of the larger wrestlers mentioned above and was won by Danny Hodge. Hodge also successfully defended the NWA World Junior Heavyweight title in Shreveport against The Great Bolo in front of 800 fans. The only other card not headlined by a battle royal this week was Little Rock, which had a main event of Clancy & Tiny Smith vs Waldo Von Erich & The Great Bolo. The heels won that match with a little help from a "metallic object" that Bolo used on Tiny.

Oni Wiki Wiki is not booked on any shows for about a month. Bing Ki Lee left the territory; he next shows up in CMLL in Mexico.

A brief rundown of the rest of the year, since we won't be covering it again for a little while: Waldo Von Erich becomes the top heel, feuding mostly with Mike Clancy. He also has some matches against Danny Hodge, and ends up doing a brief heel vs heel feud with The Great Bolo which leads to Bolo leaving the area. Karol Krauser comes in from Ohio (where he had been working as Karol Kalmikoff) in December to fill Bolo's spot. The masked tag team of The Mighty Yankees (Roger McKay & Buddy Knox) come in from East Texas for a little over a month, but don't move beyond mid-card status. On the babyface side, Hodge & Clancy remain the top two stars, with Red McKim and Torbellino Blanco highlighting the middle portion of the cards. Alex Perez moves from the heel side to the babyface side as a frequent opponent of The Mighty Yankees, and Johnny Heidmann comes in as a mid-card heel.