- November 05, 2019
Our coverage of Tri-State in 1979 continues with a look at the week ending November 11th: the tag team titles appear to have changed hands in Tulsa, Haystack is back (but as a heel) & more! 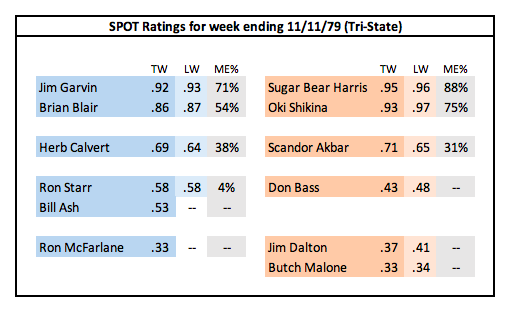 Notes/Analysis: For the first time since the split from Watts, we have records for five house shows in a calendar week for this territory. Unfortunately, it's also the last time I have records for more than three shows for at least the next couple of months. No ads for shows in Fort Smith appear in the newspaper after this week until the following February. While this doesn't necessarily mean they weren't still running there during that time, it seems unlikely. Little Rock and Joplin are being run about once a month and Oklahoma City is run once every two weeks on average. Springfield and Tulsa are the only two definite weekly towns, Tulsa on Mondays and Springfield on Wednesdays.

We do have what appears to be the first title change in the territory, as Jim Garvin & Herb Calvert defeated Oki Shikina & Sugar Bear Harris in Tulsa in what was billed as a no-disqualification match for Shikina & Harris' U.S. Tag Team titles. Shikina & Harris also faced Garvin & Calvert in Oklahoma City and Little Rock, while in Fort Smith and Springfield they were advertised to face Garvin & Brian Blair. It's Sugar Bear's last week in the territory, so the title had to have changed hands sometime during the week, and the next time the titles are mentioned Garvin & Calvert are billed as champs. I don't have absolute definitive proof that Garvin & Calvert won the belts in Tulsa (as opposed to another town this week), but it seems highly likely. I also don't know if/how the title change was acknowledged on the rest of the shows this week.

Ron Starr faced Don Bass twice this week, in Fort Smith and Springfield. The latter bout was billed as an elimination match in the Junior Heavyweight title tournament. Kerry Von Erich was advertised in Oklahoma City, facing Scandor Akbar in the main event. The weekend shows also featured the return of Haystack Calhoun, but surprisingly he's a heel this time around. He is booked against Brian Blair in Oklahoma City and Little Rock. I believe Calhoun is aligned with Akbar, who is working both as a manager and a wrestler.

Two newcomers this week are Bill Ash and Ron McFarlane. Ash's last known whereabouts before coming here was in February in Amarillo; prior to that, he had been wrestling in Southern California. McFarlane had been in East Texas for a few weeks after starting his career earlier in the year in Central States.