- November 07, 2019
Our coverage of 1968 continues with a look at the week ending November 10th: Danny Hodge returns, I namedrop George Wallace, looking at how several finishes set up rematches a week later with added stipulations, Big John gets a little buddy & more! 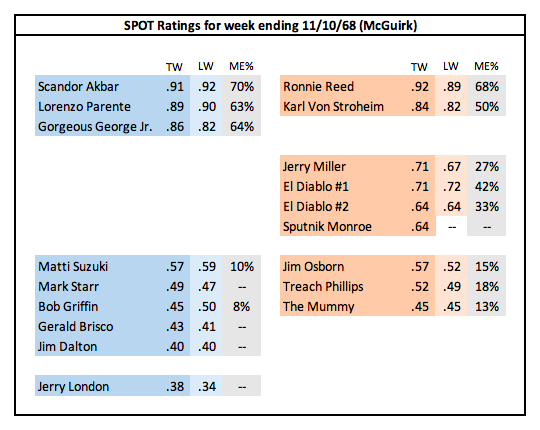 Notes/Analysis: Danny Hodge had what appears to have been his first match since October 11th this week in Joplin, teaming with Scandor Akbar to defeat Jerry Miller & Jim Osborn. The newspaper reported that Hodge had a very visible long scar on his thigh as a result of being stabbed by a fan four weeks earlier. The match went three falls, with Hodge winning the first fall by pinning Osborn in just 15 seconds. The second fall saw Osborn pin Hodge in a little over 15 minutes, and the third fall was decided in 18 minutes when Hodge pinned Miller after Osborn accidentally KO'd his own partner. As I've previously mentioned, Hodge then went to Central States for a week before returning here full-time on November 18th in Tulsa.

Many of the cards this week featured rematches from last week's shows with additional stipulations added. In Monroe, Ronnie Reed took on Gorgeous George Jr in a lumberjack match. Last week the two went to a time limit draw. Monroe drew 1500 fans this week, and it should be noted that it was the night of a presidential election. Mentioning this also allows me to backtrack and note that the October 17th card in Longview took place at the same time as independent presidential candidate George Wallace's rally. Both events were held at the Gregg County Fairgrounds, but in different buildings.

Springfield had two rematches from last week, as Gorgeous George Jr faced Ronnie Reed and Scandor Akbar took on Karl Von Stroheim. One added stip for Akbar-Von Stroheim was that Von Stroheim would not be paid if he "fled the ring"; he lost last week's match via countout after leaving the ringside area. In Oklahoma City, Lorenzo Parente fought Ronnie Reed in a rematch with two referees. Reed won last week's bout, and one can guess that he probably won via chicanery which led to having two refs this week.

Besides the above mentioned rematches from the previous week, a number of bouts this week had finishes that set up rematches for the following week. In Tulsa and Little Rock, Scandor Akbar fought Von Stroheim to no-contests. In both cases, this set up Texas rules (aka Texas death) matches for next week. In Shreveport, a lumberjack match between Gorgeous George Jr & Lorenzo Parente and Los Diablos saw Parente injured during the first fall and unable to continue. Danny Little Bear, who had wrestled earlier in the evening, came out to take Parente's place, but Diablos were still able to win the match. This set up a hair vs mask(s) match for next week.

Sputnik Monroe returned to the territory this week for the first time in almost three years. As mentioned last week, Sputnik had been in Florida before coming here. Two notable matches for him this week were against Gerald Brisco in Little Rock and against Gorgeous George Jr in Oklahoma City. Leaving the territory were Chati Yokouchi & Mr Ito. The two went to Amarillo to continue their team in a new area. Ito would return here a little over a year later, while Yokouchi wouldn't return until 1971. 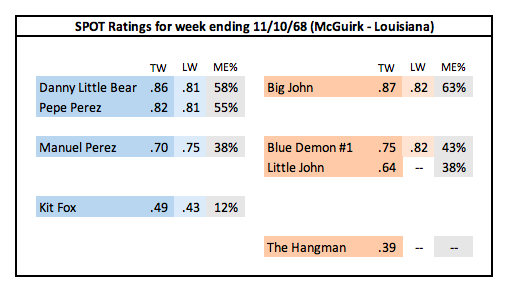 Notes/Analysis: As I mentioned last week, Blue Demon #2 seems to have vanished from the territory for a week or so. Demon #1 is on his own this week. In Baton Rouge he faced Danny Little Bear in an Indian strap match. The finish saw Little Bear win by disqualification when the referee (Oni Wiki Wiki) got entangled in the strap with Little Bear, at which point Demon slipped out of the strap and started pounding away on a defenseless Little Bear.

Baton Rouge also saw the "debut" of Little John as the tag team partner of Big John. But Little John was no newcomer, it was actually Frank Dalton. The explanation in the Baton Rouge newspaper was that he "changed his name and [was] taking on new grounds with a new style". The two Johns faced Manuel & Pepe Perez in Alexandria and Little Bear & Kit Fox in Loranger. In Lafayette the main event was a six-man tag with Little Bear teaming with the Perez brothers to face Big John, Little John & Blue Demon #1.

Masked wrestler The Hangman was booked in a few preliminary matches this week to even out the sides. He popped up sporadically in this circuit over the last several months and could have been literally anyone.