- November 12, 2019
Our coverage of Tri-State in 1979 continues with a look at the week ending November 18th: Haystack feuds with Blair, Garvin feuds with Shikina, Ron Starr may or may not have turned heel, Sugar Bear heads to Texas & more! 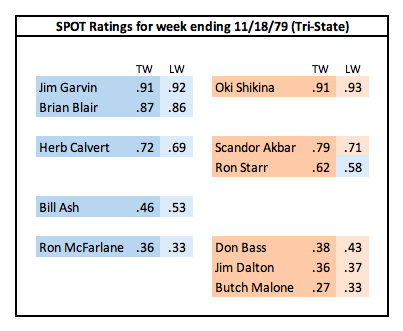 Notes/Analysis: Haystack Calhoun continued his brief run as a heel here, taking on Brian Blair on all three cards I have for this week. In Tulsa, the two fought to a no-contest. Also appearing to join the heel "side" was Ron Starr. He faced Bill Ash in Springfield and Ron McFarlane in Joplin; while they may have been babyface vs babyface "scientific" bouts, by the end of next week he is teaming with Scandor Akbar. I've moved him to the heel side starting this week, but the turn may have not actually happened until the following week. In Tulsa, Starr defeated Gama Singh in an elimination bout as part of the Junior Heavyweight title tournament. Singh came in from Central States for the show.

The other major matches in the territory this week involved Jim Garvin and Oki Shikina. The two faced off in singles bouts in Tulsa and Springfield, with Garvin winning in Tulsa. In Joplin, Garvin teamed with Herb Calvert to face Shikina & Scandor Akbar. Shikina's regular tag partner, Sugar Bear Harris (Kamala), finished up last week. He went to East Texas, where he worked as a babyface for a couple of months.