- November 11, 2019
Our coverage of 1982 continues with a look at the week ending November 14th: JYD "finishes up" here, The Grappler probably loses his mask in several towns, newcomers include a former Olympian and a future Enforcer & more! 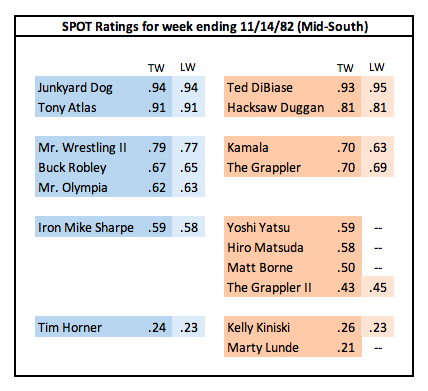 Notes/Analysis: Junkyard Dog was booked (as himself) in Biloxi and Lake Charles this week in bouts against Hacksaw Duggan. It seems likely that the big TV angle taped on October 27th had aired in many of the other markets by now, with JYD being pinned in a tag team match and having to "leave town". Interestingly enough, the Lake Charles match against Duggan this week was billed as a loser leaves town match. We can assume Duggan won the match, and this may mean that Lake Charles did not have Mid-South TV at this point in time. With JYD losing the loser leaves town match on TV, it would be weird if they had him lose another one on the local house show.

The main event in both Biloxi and Lake Charles was Ted DiBiase defending the North American title against Mr Wrestling II. DiBiase also defended the title against Tony Atlas in Alexandria on Sunday afternoon. DiBiase and Atlas wrestled each other on Sunday evening in Monroe, but the newspaper ad doesn't specify whether it was a title bout.  In Alexandria, Duggan was handcuffed to the ringpost during the DiBiase-Atlas bout. Mr Wrestling II took on The Grappler (Lynn Denton) in mask vs mask matches in Baton Rouge, Greenwood and Alexandria. In Lake Charles and Alexandria, the matches were billed as "must be a winner". The same stipulations applied in Lake Charles when Grappler faced Mr Olympia. It's probably safe to say Grappler lost all of these matches.

Other major matches in the territory were Atlas facing Kamala in Baton Rouge with the newspaper still touting Kamala as being undefeated locally. Kamala took on Buck Robley in Monroe. In Greenwood, a unique main event saw Iron Mike Sharpe take on Hacksaw Duggan in a bout where "both men can wear football helmets".

The team of Hiro Matsuda & Yoshi (aka Yoshiaki) Yatsu came in as regulars this week. Matsuda had worked for Leroy McGuirk many times over the years, but this was his first time in Mid-South. Yatsu was in his second year as a pro. He competed in the 1976 Olympics and made the 1980 Olympic team. However, when Japan joined the boycott of the 1980 Olympics in Moscow, Yatsu announced his intentions to turn pro. He wrestled for New Japan and the WWWF early in his career before coming here.

Also coming in as full-timers this week were Marty Lunde (the future Arn Anderson) and Matt Borne. Lunde came with his trainer Ted Allen, but Allen left after just a couple of weeks while Marty stayed. Chavo Guerrero worked Kelly Kiniski on the house show in Baton Rouge and also worked the TV tapings in Shreveport the next night. He had just returned from a tour of All Japan. After working these two shows, he went to Southwest to finish up there, then came back here as a regular. It should be noted that Matsuda & Yatsu (as well as Borne) worked the TV tapings two weeks ago. Because of the time it took the TV show to cycle its way through the territory, guys debuting would often come in just to work a TV taping, go back to their home base to finish up, and then come back two weeks later to do the next TV and start full-time.

Women wrestlers Leilani Kai and Princess Victoria started a several week run here. Leaving the territory was Vladic Smirnoff. He went to Southeastern and changed his ring name to Kortsia Korchenko, which he used for the remainder of his career.