- November 12, 2019
Our coverage of Mid-South in 1979 continues with a look at the week ending November 18th: the tag team titles change hands, Watts in bunkhouse matches against Mosca, Stan Hansen returns, it's the beginning of the end for the JYD-Cook feud & more! 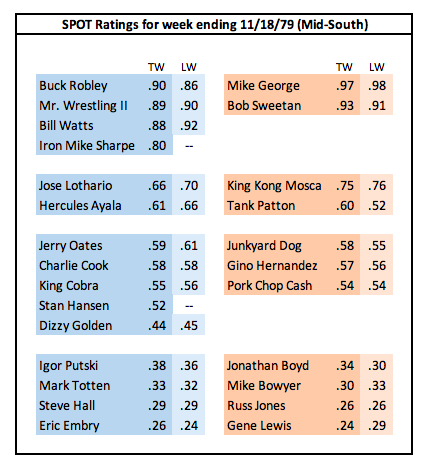 Notes/Analysis: As I mentioned last week, the Mid-South Tag Team titles changed hands at some point, with Bill Watts & Buck Robley beating Bob Sweetan & Mike George. Title histories seem to have it narrowed down to either last week in Shreveport (when Watts & Robley won what was advertised as a Texas Tornado tag team match) or Monday this week (presumably in New Orleans). The new champs were acknowledged on this week's Shreveport card, with the results stating that Watts & Robley "retained" the titles by beating Sweetan & George. A title match between those same teams was advertised for Biloxi, though the ad does not specify which team held the titles going in. In Lake Charles, another title match had Sweetan & George facing Robley & Mr Wrestling II, again with no specific mention of who the champs were. To me, this makes it more likely that last week's Shreveport show was the site of the title change. They had to acknowledge the switch this week in Shreveport, but the other towns didn't recognize it yet, presumably because the TV that acknowledged the switch hadn't made its way around the circuit. This is just a semi-educated guess on my part. Robley & II also faced Sweetan & George in Jackson and Lafayette, but the newspaper ads made no mention of it these were title matches. In Baton Rouge, Wrestling II faced Sweetan and Robley took on George in singles bouts.

In Biloxi, Mike George did double duty; in addition to the tag team title match he also defended his North American title against Wahoo McDaniel. Wahoo also worked King Kong Mosca the night before in Shreveport. Wahoo, Ken Patera and Dick Murdoch all came in as part-timers this week. Patera took on Iron Mike Sharpe in a Louisiana Heavyweight title match in Lake Charles. This was Sharpe's first full week back since an injury (likely an angle) several weeks earlier. Murdoch wrestled Ivan Koloff in Shreveport. Ivan was finishing up his two-week stint here; he also faced Bill Watts in Jackson. Watts took on King Kong Mosca in bunkhouse matches in Biloxi and Lake Charles.

Other top matches this week included King Cobra & Charlie Cook against Mosca & Tank Patton in Greenville and Cook vs Junkyard Dog in a strap match in Jackson. The feud between Cook and JYD was coming to an end, and so was JYD's time as a mid-card heel. It would take a few weeks to get the ball rolling on his new role.

In addition to the returning Iron Mike Sharpe, Stan Hansen came in as a regular this week. He had been working in Georgia. His last run in this area was in the spring and summer of 1977, though he did work some of the big Superdome cards and a handful of other shows here in between the two stints. Jake Roberts is not booked on any shows here for the next month or so. His name doesn't show up anywhere else, so he may have been injured or just took some time off.