How to read the SPOT rating charts on Charting the Territories

- November 17, 2019
One of the most important features of my research into pro wrestling in the territorial era is the development of the SPOT rating. SPOT is an acronym for Statistical Position Over Time, and it measures a wrestler's average spot on the cards over a fixed period of time as a number between 0 and 1. The highest possible rating is a 1.00; this would mean that a wrestler was booked in the main event of every card they were booked on during that fixed time period.

Here is a sample SPOT rating chart. In this column, I will go into a little more detail about how it's calculated and how it should be read. 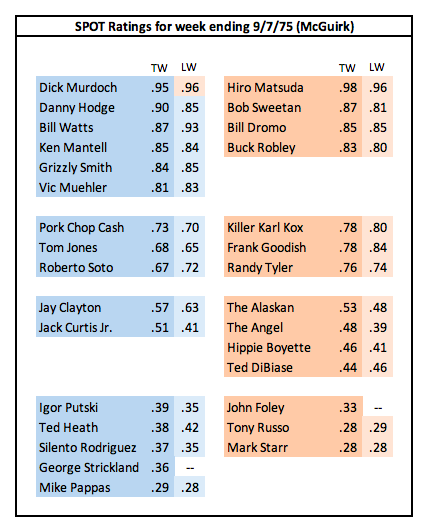 Much like other statistics, the period of time used to calculate a SPOT rating can be different. In baseball, you generally see a player's batting average listed for the current season to date. But sometimes they give you their batting average for the last week, or month, or for a three year period or even their entire career.

The most frequent usage of the SPOT rating on this blog is when I list weekly ratings for all of the "full-time" wrestlers in a territory at that time. This "weekly" rating is actually based on a rolling five-week period. So in the chart above, where it is for the week ending 9/7/75, it includes a five-week period that includes the week ending September 7th, the two weeks prior, and the two weeks afterwards. So it goes from August 18th through September 21st. The weeks are weighted differently, with the week ending 9/7 having the most weight, the weeks ending 8/31 and 9/14 having a slightly lower weighting, and the weeks ending 8/24 and 9/21 having the lowest weighting. This allows me to have a large enough sample size that the ratings don't fluctuate too wildly, places on emphasis on the more recent data, and still shows movement up and down the cards as wrestlers get pushed (or de-pushed).

The column titled "TW" is each wrestler's SPOT rating for the current week (This Week). The column titled "LW" is their rating for the previous week (Last Week). So you can see how it changed from the previous week. In the chart above, Jack Curtis Jr had a .51 rating this week, up from a .41 rating the previous week. Frank Goodish had a .78 rating this week, down from a .84 the previous week. If a wrestler has a " -- " in the LW column, it means they were not ranked last week. This usually means that the current week was their first week in the territory, either as a complete newcomer or someone who returned after a significant absence. In the chart above, preliminary wrestlers George Strickland and John Foley were the only newcomers. A wrestlers' SPOT rating for a specific time period in a specific territory only includes their bookings in that territory (so when Bill Watts goes to Florida or Georgia for the weekend to work some shows there, those are not included in his rating here).

In rare instances, you will see wrestlers with different colored shading in the This Week and Last Week columns. This means that they turned from babyface to heel (or vice versa). In the chart above, Dick Murdoch is listed on the babyface side with a SPOT rating of .95 this week. His last week rating of .96 is shaded orange. This means that he was listed on the heel side the previous week. In many cases, turns take several weeks to play out across the territory (because of the limitations of television distribution). When this occurs, I will switch a wrestler from one side to the other at the point when they start working in their new role in more than half of the territory. In very rare occasions, wrestlers may work as a heel in one town (or towns) and a babyface in others without ever switching roles in those towns. In these cases, I will list a wrestler only one side, usually the one they most identified with at the time.

The chart attempts to list only the "full-timers" who were in the territory during the given week. I don't have a set rule as for who is considered a full-timer, but my loose rule of thumb is that they have to be on at least a couple of shows a week for at least a couple of weeks. Special attractions, such as when a touring World champion comes in, someone like Andre the Giant or Haystack Calhoun, or women and midget wrestlers, are generally not listed in the SPOT ratings chart. When a wrestler is generally a full-timer but might leave for a week or two here and there (such as when Watts would leave the area for a week and go to Florida and/or Georgia) is when it becomes tricky; I try my best to apply a consistent set of rules for when to put someone in the chart and when not to. However, there will be variations from time to time. This is also one of the reasons I am trying to get data for as many shows as possible; the larger the data set the easier it will be to separate the full-timers from the part-timers.

Newcomers are listed in the week where they first appear in the territory. In those cases, their SPOT rating is based on their bookings for that week and the following two weeks. The previous two weeks (when they were in a different territory) is not included. The same goes for when a wrestler leaves; their last week on the chart will be the last week they have bookings in the territory, and their rating would only include their final few weeks in this territory, not from the following two weeks (when they may be somewhere else).

The SPOT ratings are calculated using the cards as they are advertised/booked. This is an important distinction. Occasionally wrestlers miss shows they are booked on (due to injury or being double booked, for example), but the SPOT ratings don't take that into consideration. Matches are ranked in "perceived order of importance". While this is generally based on the order they are listed in an ad or article, there are rare occasions where this is not the case. I also generally ignore things like "double main events"; the most important match on the show is given main event status, and the rest of the matches are ranked in descending order based on their perceived importance. If a particular show does not have matches advertised ahead of time, or where the matches don't follow the typical structure of a card where the preliminary wrestlers appear early and the main eventers appear later on, I may not use it in my calculations. Two examples of this: 1) Russian roulette style battle royals where the royal is held first and the matches that follow are based on order of elimination, 2) one-night tournaments. In addition, captain's matches (where two of the participants in a main event tag team match open the show in a preliminary singles bout that serves as a warmup) and other situations where wrestlers compete more than once in a show are often not used as part of my calculations.
Stats 101