How to read the FEUD score charts on Charting the Territories

- November 24, 2019
In the final week of November 2019, we introduced a second statistical metric into our analysis of wrestling in the territorial era. It's an attempt to measure feuds, ie when two wrestlers (or teams) wrestle against one another frequently over a short period of time. We have named this statistic Frequent Encounters Using Data, or FEUD for short (see what we did there?)

The FEUD score is a positive integer; the higher the number, the more "intense" the feud is at the time. Due to many factors (listed at the bottom of this post), it's hard to say what a "good" number is; as a loose rule of thumb, a FEUD score of 25 and above is a good indicator that the match in question was indeed a "feud". Many of the matches listed in the FEUD charts aren't actually "feuds"; they are merely matches that happened frequently at the time. The higher the FEUD score for a given match relative to other matches over the same time period, the bigger the feud. 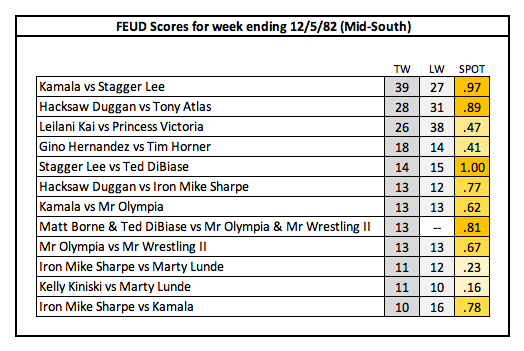 Just like our SPOT ratings, these are based on a weighted, rolling five-week period. So in the chart above, where it is for the week ending 12/5/82, it includes a five-week period that includes the week ending December 5th, the two weeks prior, and the two weeks afterwards. So it goes from November 15th through December 19th. The weeks are weighted differently, with the week ending 12/5 having the most weight, the weeks ending 11/28 and 12/12 having a slightly lower weighting, and the weeks ending 11/21 and 12/19 having the lowest weighting. For a match to appear on the FEUD chart, it must occur at least three times over the five week period and have a minimum FEUD score of 10.

They are listed in descending order by FEUD score. In the chart above, Kamala vs Stagger Lee is listed first, as it is the biggest "feud" in the territory at the time. The first column on the right, labeled "TW", is the FEUD score for the current week (This Week). The second column labeled "LW" is the FEUD score for the previous week (Last Week). In this case, you can see the FEUD score for Kamala vs Stagger Lee increased from a 27 last week to a 39 this week; this is a sign that the feud was becoming stronger (ie, happening on a higher percentage of cards). The third column lists the SPOT rating for that matchup; this way you can see which of these matches generally occurred higher up on the card. The SPOT rating column is also color-coded; in the chart above, there are four matches that would be considered "main event feuds" as they have a SPOT rating of .80 or above: Kamala vs Stagger Lee, Hacksaw Duggan vs Tony Atlas, Stagger Lee vs Ted DiBiase, and Matt Borne & Ted DiBiase vs Mr Olympia & Mr Wrestling II. These are all shaded the darkest. Conversely, Iron Mike Sharpe vs Marty Lunde and Kelly Kiniski vs Marty Lunde were most likely to take place lower on the cards, as they each had an average SPOT rating below .40 and thus are shaded very lightly.

The limitations/characteristics of the FEUD metric are as follows: