- October 02, 2019
Our coverage of 1975 continues with a look at the week ending October 5th: DiBiase works as a babyface around the horn, two Funks and a Crippler are advertised, the first last (not a typo) brass knuckles title match & more! 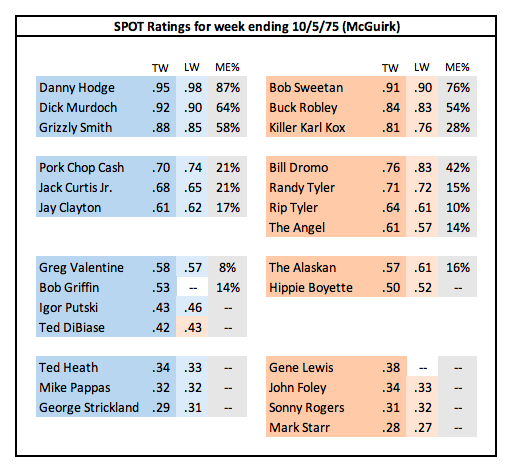 Notes/Analysis: As mentioned last week, Ted DiBiase turned babyface around this time, with the turn weaved in to the feud between Dick Murdoch (who was billed as his mentor) and Killer Karl Kox. Ted defeated Hippie Boyette in Monroe, Rip Tyler in Shreveport and Randy Tyler (by disqualification) in Baton Rouge. In addition, he was booked against Gene Lewis in Chalmette and Sonny Rogers in Alexandria, so all of his opponents this week were heels.

Dick Murdoch continued to feud with Buck Robley, who in addition to wrestling regularly was managing Kox and Hiro Matsuda (when Matsuda was in the area). They had loser leaves town matches in Wichita Falls and Greenwood, while in other towns (where Murdoch had already beat Robley in loser leaves town matches) Dick faced various bounty hunters "sent" by Robley. In Shreveport, Terry Funk tried to collect the $2,000 bounty but was defeated by Murdoch. The next night in Jackson, Murdoch was advertised as defending the North American title against Dory Funk Jr. Dory was in Portland the night before, teaming with Lonnie Mayne against Jonathan Boyd & Norman Frederick Charles. In Chalmette, the advertised bounty hunter was Ray Stevens; results in the newspaper list Murdoch as having defeated Robley, so Stevens may not have appeared. Terry, Dory, and Stevens were all based out of Amarillo at the time, but were in demand across the country and making occasional shots for other territories. Yet another Amarillo-based wrestler, the Lawman (Don Slatton), was booked against Killer Karl Kox in Wichita Falls. Lawman's name recently resurfaced in discussions of Harley Race after Harley passed away; a story was recapped where Lawman intended to swerve Harley and "win" the World Heavyweight title.

On Sunday in Alexandria, Murdoch faced Bob Sweetan in a brass knuckles match for Sweetan's brass knux title. The newspaper ad states that the NWA will no longer be sanctioning brass knuckles bouts so Murdoch "will be the last man to try and take Sweetan's title away". This same scenario will repeat itself in other towns beginning next week, so we will call it the "FIRST" of a series of "LAST" brass knuckles bouts. The card was a special afternoon show at Bringhurst Field, home of the Alexandria Aces, which was a AA farm club for the San Diego Padres between 1972 and 1976.

Danny Miller was advertised against Killer Karl Kox in Jackson and Chalmette. Results are unavailable (the Chalmette newspaper only listed results for the Murdoch-Robley main event), but it should be noted that Miller, who was full-time in Mid-Atlantic at the time, was advertised for a show in Waynesville NC the same night as Chalmette. Regarding Kox, last week I mentioned that Kox' SPOT rating of .76 (which put him in the "upper mid-card" category) seemed low. This week, it increased to a .81, which does classify him as a main-eventer.

Looking at the other main eventers in the territory, Bob Sweetan faced Grizzly Smith in a lumberjack match in Loranger. Another main event featuring Sweetan saw him take on Danny Hodge in Springdale. Hodge main evented Monroe against Bill Dromo. And to complete the circle, Dromo faced Grizzly in Greenville. Grizzly also was advertised to team with Jack Curtis against Dromo & Rip Tyler in Baton Rouge. The results from that show indicate that Grizzly was injured and did not wrestle. That seems to have been an angle for the show, as Grizzly worked other matches during the week, and was at ringside for the match. Taking his place was newcomer Bob Griffin, who pinned Tyler to win the match. Griffin had defeated another newcomer, Gene Lewis, earlier in the evening. So it could have just been an angle to introduce Griffin with a bang. Griffin came in from Georgia, while Lewis (Gene Petit aka Cousin Luke among many other gimmicks) was returning here after taking some time off following a New Japan tour in July.

Leaving the territory were Ken Mantell, Tom Jones and Silento Rodriguez. In addition, the Spoiler wrapped up his two-week stint here. Mantell actually missed three matches he was advertised for last week, so he may have been injured. His next known whereabouts are in All Japan starting in mid-November. Jones went to Gulf Coast, though I had a little trouble finding that out. If you search newspaper archives in the mid-70s for "Tom Jones" you get a LOT of false positives. Silento was nearing the end of a two-decade long career; I can't find any records for him after leaving here until the following May when he returns for a four-month run.