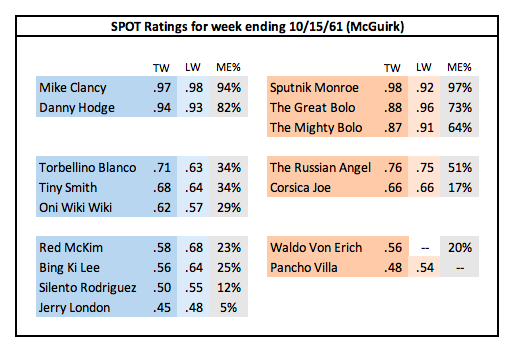 Notes/Analysis: The big feud in the territory continued to be Sputnik Monroe vs Mike Clancy. They faced each other this week in Tulsa, Little Rock, Wichita Falls and Springfield. The Little Rock bout was a Texas Death match (won by Sputnik after nine falls). The ad for Wichita Falls lists the stipulations for the match as "fight to a finish, falls don't count, no holds barred" which are basically the rules for a Texas Death match. In Oklahoma City, the two were on opposite sides of a tag team match, with Clancy & Danny Hodge defeating Sputnik & The Russian Angel. The Springfield card was held on Saturday this week instead of its normal night of Wednesday.

Beginning this week, the Shreveport newspaper lists attendance figures when they print the results from the weekly shows. This week's attendance was reported as 700 for a card which featured The Mighty Bolo vs Oni Wiki Wiki on top. Newspaper articles in other towns tell us who a couple of the referees were on the circuit. Harvey Cole is a referee in Baton Rouge this week, and Al Massey refs in New Orleans. Massey also wrestled on the Baton Rouge card.

Tuffy Truesdale and his alligator continued their run here this week. Tuffy faced the gator in Shreveport and Wichita Falls this week.

The only newcomer was Waldo Von Erich. His first match here appears to have been in Tulsa against Bing Ki Lee. Waldo had been wrestling since the mid-50s and came here after a five month run in East Texas. He first started using the Von Erich name after Fritz took him under his wing in Canada in 1958. Prior to that, he had used the names Kurt Von Sieber, Waldo Von Sieber and Wally Sieber. The Wally Sieber name was used when he wrestled in his hometown of Toronto, Walter Sieber being his real name. He started out low on the cards here, getting victories over some of the mid-carders and clearly in line for a push. He also faced Bing Ki Lee in Wichita Falls and Jerry London in Oklahoma City. One of the cornerstones of booking in the territories was the regular turnover of talent. When main eventers would first come in, they would often spend a few weeks being built up on the undercard while one of the main eventers is finishing up their run. We'll see this play out over the next several weeks as Waldo's SPOT ratings increase. When two of the current top heels leave, he moves into a main event spot.