- October 09, 2019
Our coverage of 1968 continues with a look at the week ending October 13th: Hodge & Donovan stabbed by a fan in Oklahoma City, I am _thisclose_ to giving up on trying to figure out who the Blue Demons were, Pepe Perez moves up the cards in Louisiana & more! 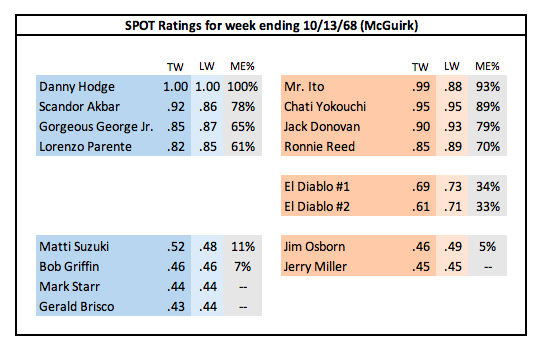 Notes/Analysis: The big news this week took place on Friday night at the Stockyards Coliseum in Oklahoma City at the end of the main event. NWA World's Junior Heavyweight champion Danny Hodge successfully defended the title against Jack Donovan, but the important stuff happened afterwards. A newspaper article the next day says that Donovan's partner (Ronnie Reed, who may have been handcuffed at ringside as part of the match stipulations) got a chain, entered the ring and struck Hodge. The fans then started to come to Hodge's aid and what was described as a "ringside melee" broke out, which chairs being thrown and fans trying to enter the ring. From the description, it seems that Reed may have escaped before the others, leaving Hodge & Donovan to basically join forces in order to fight off the crowd and return to the dressing room. A fan armed with a small pocket knife leapt into the ring and stabbed both men, who were hospitalized immediately afterwards.

According to the Longview newspaper the following week, both men were stabbed in the legs. Hodge received 175 stitches for his wounds while Donovan received 300. However, an article in the Springfield newspaper a few weeks later said Hodge needed more than 100 stitches while Donovan needed "almost as many".

Hodge is out for at least a few weeks as a result of this. He works Joplin on November 9th and is booked outside the territory in Kansas City on November 11th, Sedalia, MO on the 12th and St Joseph, MO on the 15th. He is also advertised for a show in Detroit on November 9th, but there's no way he could have done that show and Joplin. He worked a TV taping for McGuirk, which was taped and/or aired on November 16th in Oklahoma City. He returns to a full-time schedule here the following week. Donovan is out longer, with his first match back looking to be November 30th. I believe his wife, Mrs Jack Donovan (who was managing both her husband and Ronnie Reed), was taken off the road to be with her husband while he recovered.

This threw a monkey wrench into matches already announced for the following week. In Monroe this week, Scandor Akbar & Gorgeous George Jr faced Chati Yokouchi & Mr Ito, and it was announced that the winners would get a title bout against US Tag Team chaps Donovan & Reed "next week". The match was won by Akbar & George. In Longview this week (the night before OKC), Yokouchi & Ito faced Akbar & Hodge with the same stipulation, with Hodge & Akbar winning that match and earning the future title shot. Of course the title matches would not take place; we'll look at what happened instead when we get to next week's coverage on the blog.

Before all the stabbing went down, Hodge spent the week defending the title around the loop against either Donovan or Reed. In Tulsa and Little Rock, he faced Reed. In Springfield (and OKC), his opponent was Donovan. Both the Little Rock and Springfield newspapers mention that Donovan & Reed flipped a coin to see who would get the title bout. Obviously, the "result" of the "coin toss" differed from town to town. Whoever lost the coin toss would face Lorenzo Parente in a mid-card bout.

Scandor Akbar moves up the SPOT ratings, going from a .86 last week to a .92 this week. Keep in mind that these ratings are calculated using a five-week rolling (and weighted) average. That means that this week's numbers includes data from the following two weeks, where Hodge is off the cards and someone has to take his place at the top. That partially explains Akbar's increase this week, though it should be noted that he was moving up the cards anyway since returning a couple of weeks earlier.

Women wrestlers Barbara Owens, Betty Bouche (Boucher), Donna Christantello (Christianello) and Toni Rose come in for two weeks. This week, they are generally booked in five-woman battle royals along with Mrs Donovan. As was usually the case with the women wrestlers, they were placed in the middle portion of the card; their SPOT rating this week was a .67 (since they are all booked in the same matches together, they all have the same SPOT rating).

The Blue Demons (who may or may not have been some combination of Frank Martinez, Tamayo Soto and Al Greene) moved from this circuit to the lower Louisiana circuit this week. It should be noted that there is ANOTHER team working for Gulas as The Blue Demons that start this week. So for all we know, the Blue Demons working the main McGuirk circuit are the ones who went to work for Gulas and two completely different people assumed the role in the Louisiana towns this week. In a perfect world, where we had the comings and goings of EVERY active wrestler at the time, we could see who wasn't booked anywhere else at the exact times the Blue Demons are here and figure out the most likely suspects. 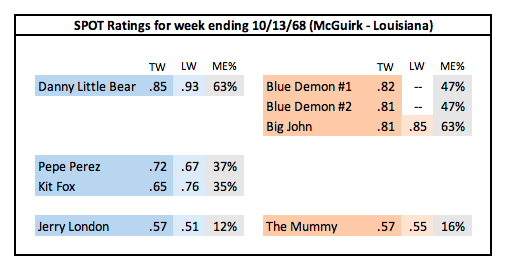 Notes/Analysis: After over two months in the territory, Pepe Perez' SPOT rating breaks the .70 mark for the first time, with a .72 this week. When he first came in, his SPOT rating was in the low .50's. It increased the first few weeks, then hovered in the low .60s for several weeks before moving to a .67 last week. This is a clear indication of him being moved up the cards. Both Danny Little Bear and Kit Fox see their SPOT ratings decrease this week. Little Bear is now primarily feuding with Big John, with numerous singles bouts. That means his regular partner, Kit Fox, finds himself more and more in matches lower on the card. His SPOT rating, which was .84 two weeks ago, is now .65.

The territory pulled out of the New Orleans area this week, with the weekly shows in Chalmette ceasing after ten weeks of being run on Thursdays. Loranger, which had been moved from Thursday to Monday during that time frame, moved back to Thursdays. The promotion wouldn't return to Chalmette until May 1969.

Baton Rouge this week was headlined by Little Bear & Kit Fox defending their Louisiana state tag team titles against The Blue Demons, whoever they may have been. Alexandria had a special grudge match between Pepe Perez and The Mummy, though both worked earlier in the evening. The grudge match was billed as one fall, fight to the finish. Loranger had the Demons against Perez & Jerry London on top, while Lafayette had Little Bear defending the Louisiana state heavyweight title against Big John in a Texas death match.