- October 30, 2019
Our coverage of Tri-State in 1979 continues with a look at the week ending November 4th: Jim Garvin tries out three different partners, wrestlers who were going back and forth between here and Texas stop coming back, Ron Starr comes in as a regular & more! 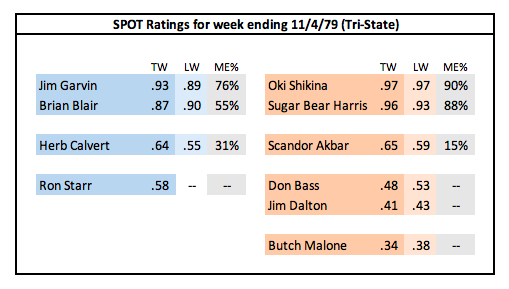 Notes/Analysis: Oki Shikina & Sugar Bear Harris continued to dominate the main event scene as U.S. Tag Team champions, but Jim Garvin was trying his best to dethrone them. He teamed up with Herb Calvert in Tulsa, Brian Blair in Fort Smith, and Gino Caruso (aka Pete Sanchez) in Springfield for title matches. Garvin & Calvert won by disqualification in Tulsa, but results aren't available for the other towns this week.

Also in Tulsa, Ron Starr started as a regular here, defeating Don Bass. Starr had worked here once a few weeks prior in Springfield while he was a regular in Central States. This week in Springfield, he faced Brian Blair in what was billed as an elimination match in the Junior Heavyweight title tournament that had been taking place sporadically throughout the territory. Despite working against babyface Blair, Starr was slotted as a babyface here upon coming in. However, that wouldn't last very long.

Gary Young, Ted Heath, Tor Kamata and Haystack Calhoun left the territory this week, Calhoun would work some shows in Florida and Amarillo for a couple of weeks and then come back here. In the cases of Young, Heath and Kamata, all three had been working here while also working a few nights a week in Texas, either in East Texas or Amarillo. Beginning this week, they just stayed in Texas, with Young in Amarillo, Heath in East Texas, and Kamata working shows for both Texas-based territories.