- October 30, 2019
Our coverage of 1975 continues with a look at the week ending November 2nd: Killer Karl Kox wins the North American title, Andre the Giant comes in and has to put his money where his _weight_ is, the territory gets a little bit blond-er & more! 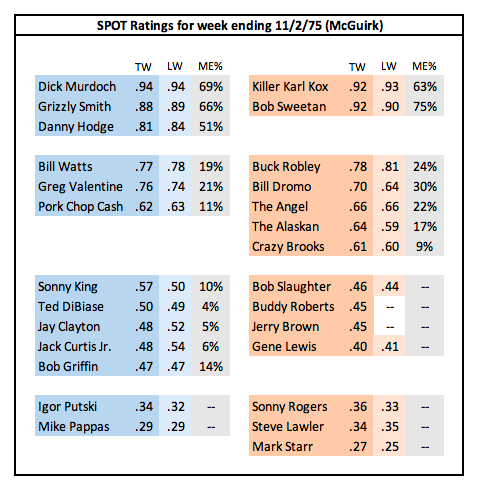 Notes/Analysis: Killer Karl Kox won the North American title from Dick Murdoch on Tuesday night in Shreveport after using a foreign object. The two also faced off this week in Tulsa, Jackson, Chalmette and again in Shreveport on Sunday. That special weekend card was so that the promotion could book Andre the Giant in both Shreveport and Alexandria. Often, when special attractions (such as Andre or the World Heavyweight champ) came in, the promotion would run one of their normal weeknight towns on the weekend so that the attraction could appear in as many towns as possible.  Andre started this Sunday and stayed through the following week. He had just spent a week in East Texas, and after his run here he went to work for Gulas for about a week.

Andre was booked to win a 13 man battle royal in Shreveport (and I believe most every other town next week) with the winner to get $5,440. How did they come up with that number, you ask? Simple, each wrestler had to "put up" $1 for every pound they weighed, and the promoter "added" $2,000 to the pot. If we accept that larger wrestlers would have an advantage in a "real" battle royal, this was a way of creating odds; since a larger wrestler was more likely to win, they had to put up more of "their own" money than a smaller wrestler.

Bill Dromo finished up this week, taking on Grizzly Smith in loser leaves town matches in Alexandria, Baton Rouge and Greenville. Grizzly won for sure in Alexandria and Baron Rouge, and while I don't have results for Greenville the outcome was almost certainly the same there. In Lafayette, Dromo faced Sonny King in a no disqualification match. Dromo would next go to Florida.

The main event in Lafayette was Grizzly teaming with Dick Murdoch to face Bob Sweetan & The Angel (Frank Morrell) where the loser of the fall had to leave town. Another stipulation was that Murdoch had to post a $500 "peace bond" that he wouldn't turn on Grizzly. This could mean that the Lafayette TV cycle was several weeks behind the rest of the territory and that Murdoch's turn had just aired. It appears, based on next week's Lafayette card, that Murdoch lost the fall. Murdoch was going to Japan in mid-November, and while he does work other towns in the territory the following week, this was their way of writing him off in Lafayette.

Some interesting stipulation matches happened in various towns this week. Sonny King took on The Angel in Shreveport where "neither man can take a fall except by using a head butt". The Angel fought Sonny King in Baton Rouge in a challenge match where the winner got $500 (presumably from the loser); Angel won that bout. Pork Chop faced Crazy (aka Killer) Brooks in Greenwood in a special 10 minute bout with no referee. In Fort Smith, Danny Hodge took on Bob Sweetan in a 10 round boxing match. In Monroe, Hodge fought Buck Robley in a Texas death match as part of the angle where the NWA had "banned" Texas death matches and brass knuckles matches as of November 1st. The Murdoch-Kox match in Jackson was billed as the "last" brass knuckles match there.

The only full-time newcomers this week were The Hollywood Blondes of Buddy Roberts & Jerry Brown, who I believe came in with manager Oliver Humperdink. All three had been working in Southern California, though Roberts & Brown worked a seven-week tour for New Japan from August through mid-October. This was the third stint in the territory as a team for Roberts & Brown, who had first teamed up here in March 1970 when Roberts' regular partner Jack Donovan was injured. This was their first time back since early 1973.