- October 23, 2019
Our coverage of 1975 continues with a look at the week ending October 26th: World champ vs World champ in Tulsa, the territory apparently isn't big enough for two Killers, what the heck is a "combat bout" & more! 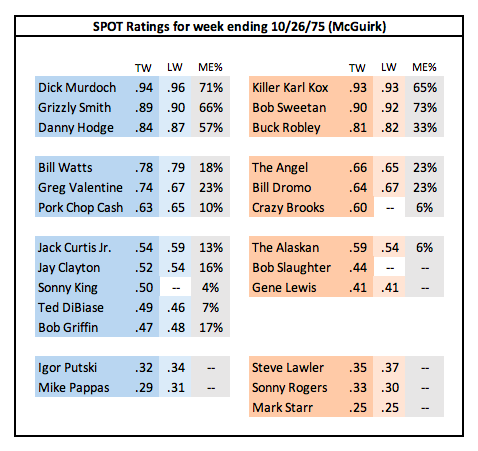 Notes/Analysis: In Tulsa this week it was World champion vs World champion as Jack Brisco defended the NWA World Heavyweight title against NWA World Junior Heavyweight champ Hiro Matsuda. Brisco came in just for the one show; he worked in Asheville NC the day before for Mid-Atlantic and was in Dallas the next night. Matsuda was here for the week, also facing Jack Curtis Jr in Alexandria, Jay Clayton in Fort Smith, Danny Hodge in Greenville, Greg Valentine in Greenwood, and teaming with Buck Robley in Monroe against Hodge & Ted DiBiase. The match with Valentine might not have been a title match, but the other singles bouts definitely were. The only results I have were in Alexandria where Matsuda defeated Curtis.

Dick Murdoch recruited Greg Valentine to help him in his battles with Killer Karl Kox & wrestler/manager Buck Robley. The two teams faced off in Tulsa and Shreveport, with Murdoch & Valentine winning in Shreveport. Murdoch took on Kox in a singles bout in Jackson while Valentine teamed with The Spoiler to face Buck Robley & his newest charge, Bob Slaughter. The future Sgt Slaughter debuted this week, coming from Portland (where he had wrestled as Bob Remus). In Chalmette, Robley faced Valentine in a singles bout while Dick Murdoch was bringing a "mystery partner" to face Kox & Waldo Von Erich. Based on who was in the territory at the time and who was not advertised for either of the shows on that night, I'd guess The Spoiler was the mystery partner.

The Spoiler, Waldo Von Erich and Bobo Brazil all came in just for a few shows this week. Spoiler came in from Georgia. Waldo had just finished up a run with the WWWF, and after this week his name doesn't seem to show up anywhere for a month, at which point he is booked here and for some shows in Toronto. So perhaps he was coming in as a regular and got injured, but I don't know that for sure. Bobo was working in Georgia and also occasionally for the WWWF. This week appears to be the only time he ever worked for McGuirk/Watts. Bobo and Waldo faced one another in Shreveport and Jackson, with the Shreveport bout going to a double countout. Waldo faced Bill Watts in Tulsa, while Watts went against The Spoiler in Alexandria (with Watts victorious). Bobo also faced The Angel (Frank Morrell) in Chalmette.

Other notable matches this week were Grizzly Smith vs Bob Sweetan in a Texas Death match in Lafayette, Pork Chop Cash vs The Alaskan in a "combat bout" in Greenwood, and Danny Hodge vs The Alaskan in a winner take all match in Fort Smith. The "combat bout" was Pork Chop wearing combat boots for the match. So The Alaskan was either using a loaded boot or just had very heavy boots that fit the gimmick, and this was Pork Chop's way of countering it. The "winner take all" stip usually refers to the purse; i.e. the winner gets both shares of the purse and the loser gets nothing. In most cases (including this one), it's a rematch from a non-finish the previous week. While not explicitly stated in this case, it also usually applied to both week's purses. So because of the non-finish the previous week, the entire purse was "held up" and this week the two men fought again with the winner getting "both shares" of "both weeks' pay". This was another touch of realism that is lacking in wrestling today, the idea that winners of a match get paid more than losers and that pay is on a per-match basis. If the fans believe that to be the case, then adding a "winner take all" stipulation is an easy way to make a match seem more important.

In addition to Bob Slaughter, other newcomers this week were Crazy Brooks and Sonny King. Brooks was Killer Tim Brooks. My feeling is that since Killer Karl Kox was already using the name Killer here, they had to give Brooks a different name. So they made him Crazy. He came here after a run in Amarillo. Sonny King came in from Georgia and was billed as hailing from McCall, LA (near Donaldsonville, in between Baton Rouge and New Orleans). Most online sources list King as having grown up in North Carolina and getting into pro wrestling in Detroit after a brief career as a boxer. King may very well have been born in McCall. He definitely lived in Donaldsonville after his wrestling career ended and may still live there. Ted Heath left the territory and went to Gulf Coast.