- October 18, 2019
Our coverage of 1961 continues with a look at the week ending October 22nd: Sputnik-Clancy feud comes to a head, Great Bolo wins and loses the World's Junior Heavyweight title in the span of a few seconds, some Louisiana attendance notes & more! 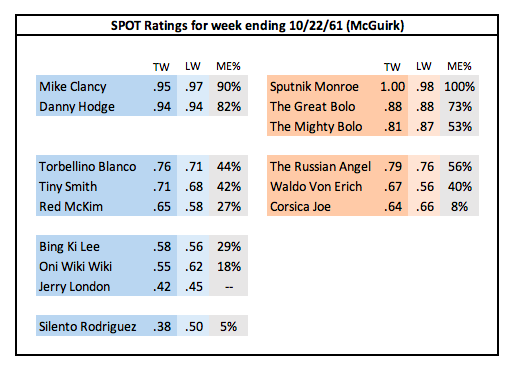 Notes/Analysis: Sputnik Monroe faced Mike Clancy in a Texas rules match in Tulsa this week, with Sputnik winning the bout in what appears to be the blowoff to their feud in that town. In Wichita Falls, they fought each other in a match with the ring surrounded by a wire fence. Results from that show are not available. They also were on opposite sides of tag team bouts in Little Rock and Springfield, with Sputnik teaming with Waldo Von Erich both nights and Clancy teaming with Danny Hodge in Little Rock and with Tiny (Grizzly) Smith in Springfield.

Hodge wasn't in Springfield because he was booked to defend the NWA World's Junior Heavyweight title against The Great Bolo in Fort Smith on the same night. Bolo actually won that match and seemed to win the title, but he continued to attack Hodge after the bout and the referee reversed his decision mere seconds afterwards, returning the title to Hodge. Also in Fort Smith, Red McKim took on Corsica Joe in a grudge match with the ring surrounded by wire. The wire fence was also used in other towns this week when Tuffy Truesdale wrestled his alligator, presumably as a safety precaution.

A couple of the Louisiana towns were headlined by The Russian Angel vs Torbellino Blanco. In Shreveport, the two had fought to a double disqualification in the opening match last week when both attacked the referee. This week they were rematched in the main event. The show drew 1100 fans, which the newspaper noted was above the 700-800 number that the shows had been drawing the last several weeks. The two also main evented Monroe and were on opposite sides of a mixed tag team bout in Harvey. Blanco teamed with Judy Grable against Russian Angel & Peggy Allen. Harvey is just outside of New Orleans to the south, and was run this week due to the Municipal Auditorium not being available. The local promoter was Vince Arnona and the show drew 800 fans.

Judy Grable & Peggy Allen came in this week to start a brief run. They mostly worked in mixed tag team matches this week with Grable on the babyface side and Allen on the heel side. As mentioned above, Tuffy Truesdale and his alligator continued their run here with exhibitions/matches in Tulsa, Little Rock and Springfield. Leaving the territory was Pancho Villa (Roberto Pico), who went to Gulf Coast. He would return here in 1966.