- October 15, 2019
Our coverage of Tri-State in 1979 continues with a look at the week ending October 21st: a few more newcomers to the roster, looking at the towns they run through the remainder of the year, lots of babyfaces appear in main events & more! 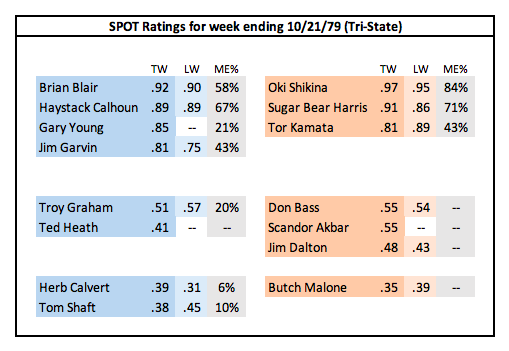 I have data for the following house shows this week:
Monday - Tulsa, OK
Wednesday - Springfield, MO

Notes/Analysis: A few newcomers to the "full-time" roster this week, though at this point in time it's not a "full-time" territory. While they may be running spot shows on the weekends, I don't think they're running any other regular towns besides Tulsa and Springfield. Over the next few months they'll add Oklahoma City as an almost weekly town, plus run Fort Smith, Joplin and Little Rock about once a month.

Newcomers to the SPOT ratings are Gary Young, Ted Heath and Scandor Akbar. Young is working regularly in Amarillo at the time, while Heath is working in East Texas. I believe Akbar is managing Oki Shikina & Sugar Bear Harris (and perhaps Tor Kamata) but is also being used as a wrestler on a regular basis. Leaving the territory is Chico Cortez; I have no further information on his whereabouts after leaving here.

Kerry Von Erich worked the Tulsa show. He was advertised against Troy Graham but ended up defeating Butch Malone. Malone's originally advertised opponent, Herb Calvert, instead faced Akbar, beating him by dq. Akbar was supposed to face Tom Shaft, but it looks like both Graham and Shaft did not appear. The main event in Tulsa was Sugar Bear & Shikina wrestling Brian Blair & Haystack Calhoun to a double disqualification. Also on the card was Gary Young beating Jim Dalton in a Junior Heavyweight title tournament match. As mentioned previously, these tournament bouts occur sporadically for a few months in Tulsa, but there doesn't seem to be much continuity.

In Springfield, the advertised card featured Haystack vs Shikina on top, plus Blair vs Sugar Bear and Jim Garvin vs Don Bass as the other main bouts.

In looking at the SPOT ratings chart, you may notice that almost all of the babyfaces have a number in their ME% (percent of main events). Looking at the cards over a several week period, the main events are generally Sugar Bear & Shikina vs two babyfaces, without a steady babyface team. So everybody gets a crack at the heel duo, presumably to establish them as a force. It also might be a way to protect the top babyfaces. If Blair or Young or Garvin team up with someone lower on the card, that other person might be the one to take the pinball. There are also singles bouts between Haystack and Tor Kamata that main event some of the cards.