- October 16, 2019
Our coverage of 1975 continues with a look at the week ending October 19th: Murdoch and Kox main event around the horn, Watts faces a couple of outsiders, Bill Dromo's push is cooled off & more! 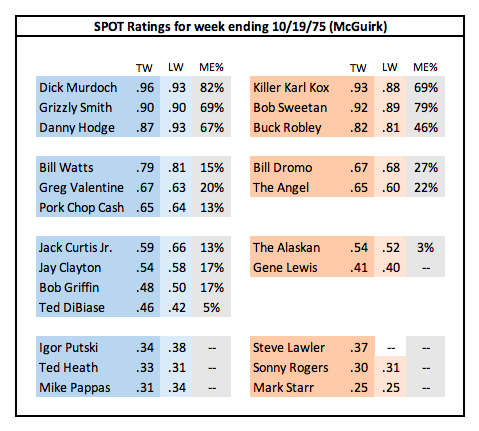 Notes/Analysis: After several weeks of building to Dick Murdoch taking on Killer Karl Kox (with different timetables in different towns due to the TV airing on a delay in some markets), their feud dominates the main events this week. They face each other in singles bouts in Tulsa, Shreveport and Greenwood. In Chalmette, they were on opposite sides of a tag team bout, Murdoch teaming with Greg Valentine against Kox & Buck Robley. The matches in Tulsa and Shreveport were for the Brass Knuckles trophy, with the stipulation again being that the NWA was about to "ban" brass knuckles matches so this would be the last one in each town. The Shreveport newspaper said Kox won the brass knuckles trophy from Murdoch the previous week in New Orleans and this would be Murdoch's last chance to regain it. Kox won the match and, according to the paper, "permanently gained control" of the trophy. In Lake Charles, the main event featuring Grizzly Smith vs Bob Sweetan was billed as "the last" Texas Death match in the town, again saying the NWA was banning that type of match going forward. It seems to me that saying "this is the last match of this type that will ever be held" was just a marketing ploy to try and draw fans.

Bill Watts continues to take a backseat to the red-hot Dick Murdoch. His SPOT rating this week falls to a .79, which puts him in the "upper mid-card" category. He's generally second from the top behind Dick Murdoch in the A towns, with Danny Hodge or Grizzly Smith main eventing the B towns. This week he faced a couple of outsiders. In Tulsa and Shreveport, he was booked against Kim Duk, who came in from the AWA. In Chalmette, he faced Toru Tanaka, who came in from Georgia. Watts beat Duk in Shreveport and beat Tanaka the next night. Results from Tulsa aren't available but I assume Watts won there as well. Another interesting outside name was advertised in Ardmore, as Red Bastien was scheduled to face The Alaskan underneath a main event of Hodge vs Sweetan.  Bastien was working full-time in East Texas. Ardmore is pretty close to the Texas border about half-way between Dalls/Fort Worth and Oklahoma City, so him coming in just for that one show is very feasible.

When I post the SPOT ratings chart every week, I include the "last week" number so you can see short-term changes in a wrestlers' position. But you can definitely get a better feel for their path by looking at how the rating changes over a longer period of time. In particular, looking at Bill Dromo during his run here, you can see that he was cooled off and moved down the cards after spending some time as a main-eventer (mostly in the B towns feuding with Grizzly Smith). When Dromo first turned heel in early August, his SPOT rating was a .64. Two weeks later it was a .81, putting him in the main-eventer category. He spent a total of six weeks with a SPOT above .80, then it dropped to a .76 in early October. He's here for a couple more weeks and then leaves. This is a good example of someone being built up for a specific feud (with Grizzly), then after it plays out, being moved down the cards on his way out.

Young Ted DiBiase has a couple of big matches this week, facing Buck Robley in Tulsa and Shreveport. In Shreveport he won by disqualification (which is the likely result in Tulsa as well). So even though his overall SPOT rating is still fairly low, he is slowly getting bigger matches. Regaring Robley, in Shreveport it was said he was "reinstated" several weeks after losing his loser-leaves-town match to Murdoch, so that's likely how they got him back in all the towns where they ran the loser-leaves bout several weeks earlier.

There's just one newcomer this week, Steve (aka Gorilla) Lawler. He is not to be confused with the Steve Lawler who worked Georgia & other southern indies in the 90s. This Lawler worked for about a decade starting in 1971. He came here this week from Georgia, where he had been wrestling as Steve Kyle.

Hiro Matsuda spent the week in East Texas, so I removed him from the SPOT chart temporarily. While in East Texas, he defended the NWA World's Junior Heavyweight title against wrestlers such as Alberto Madril and Rick Martel. Leaving the territory was Rip & Randy Tyler and John Foley. Rip went to Gulf Coast while Randy went to Amarillo. The only mention I could find of Foley over the next few months is one appearance for Gulf Coast in November.

Midget wrestlers Billy the Kid, Bobo Johnson, Little Tokyo and Sonny Boy Hayes finished up their two-week stint here this week. All four go to the AWA for a couple of weeks in November.