- October 15, 2019
Our coverage of Mid-South in 1979 continues with a look at the week ending October 21st: Mike George and Mr Wrestling II face off in several stipulation & title bouts, Watts continues to bring in big names on the weekends, he also brings in a couple of (very) small names this week & more! 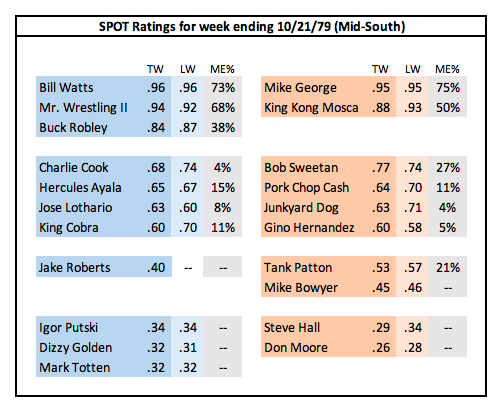 Notes/Analysis: Mike George and Mr Wrestling II continued to feud over the North American title held by George. The two faced one another in title bouts in Greenville and Alexandria. The match in Alexandria had an additional stipulation where the dq rule was waived (meaning if George was disqualified, he would lose the title). They also faced off in Jackson in a non-title bout with stipulations. If II lost, he would unmask. But if he won he would get a future title shot plus win $1,000 from George. Next week's Jackson card has George defending the title against II, so we can assume II won the bout this week. George also defended the title against Bill Watts in Shreveport, winning by disqualification.

Wahoo & Ladd were just in for the weekend. This had been happening regularly with guys like Ladd, Wahoo and Dick Murdoch, and would continue. Watts was using his relationships with Georgia, Southwest and the other NWA offices to bring in name talent on the weekends, where he usually loaded up the lineups.

Jake Roberts returned to the house show schedule after a couple of weeks off. Jerry Oates was not listed on any of the shows this week, so I removed him from the SPOT ratings; he will return next week. Leaving the territory were Stan Lane and The Missing Link. Lane goes to Florida. He comes back for a couple of weeks about a year later. The Missing Link shows up at the end of the month for Gulas, but after a week seems to disappear. Since we don't know who he was (it's definitely not Dewey Robertson), he may have used another name after that point, but nobody seems to know who he was and what other names he may have worked under.

Midget wrestlers Butch Cassidy and Ivan the Terrible come in over the weekend for a short (no pun intended) run. While I don't include the "special attractions" in the SPOT ratings chart, their rating was a .58, putting them squarely in the middle portion of the cards, as was the norm at the time for the midgets and female wrestlers.