- October 01, 2019
Our coverage of Mid-South in 1979 continues with a look at the week ending October 7th: bunkhouse matches, Dusty and Ernie Ladd make cameos, using some detective work to try and prove who Dizzy Golden is & more! 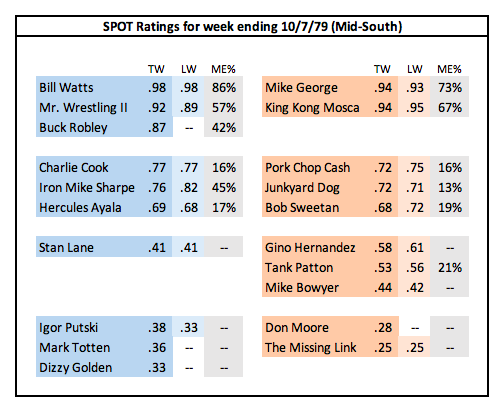 Notes/Analysis: The two big feuds on the house shows this week were Bill Watts vs King Kong Mosca and Mike George defending his North American title against Mr Wrestling II.

Watts and Mosca faced off in bunkhouse matches in Alexandria and Baton Rouge. Results from Baton Rouge list Watts as the winner. In Biloxi, they were on opposite sides of a star-studded tag team match, with Watts teaming with Dusty Rhodes (who came in from Florida) to face Mosca and Ernie Ladd (in from Georgia). Dusty and Ernie both appear to have come in just for this show.

George was scheduled for title defenses against Wrestling II in Alexandria, Biloxi, Shreveport and Lafayette. In Lafayette, the disqualification rule was waived (meaning if George lost by dq, he would lose the title). The only results I have for these matches was in Shreveport, where George won by dq.

Buck Robley returned to the territory this week after about a month and a half off the cards; not sure if he was injured (either for real or in storyline) but I don't think he was in another territory. Other newcomers were Mark Totten, Dizzy Golden and Don Moore. I don't have much information on the careers of Totten or Moore. Totten's name shows up a few times in Florida in September before coming here. Moore's name last showed up in Mid-Atlantic over the summer before coming here.

When I first saw the name "Dizzy Golden", I assumed it was Ed Leslie/Brutus Beefcake. But there's a chance it may have been Bill Smithson (aka Moondog Spike). Smithson used the name Dizzy Golden in the mid-80s teaming with his "brother" Mike Golden in Texas. There is no other record of Smithson using that name at other times, but wrestlingdata dot com does link these Dizzy Golden bookings to Smithson. Beefcake used the name Dizzy Hogan in several places dating back to 1981, but some online sources say he also used the name Dizzy Golden. Both Smithson and Leslie have gaps in their careers that match the time period Dizzy Golden was here, so it could have been either of them. I'm leaning towards Leslie, and here's my reasoning. Over the summer, Leslie was in Memphis as Eddie Boulder teaming with Hulk Hogan, who was using the name Terry Boulder. Hogan left Memphis for Georgia (where he was billed as Sterling Golden) at pretty much the exact time Dizzy Golden shows up here. Smithson's name, meanwhile, shows up only sporadically as a TV enhancement wrestler earlier in the year for Gulas, and then again in early 1980 in the same role for Jarrett. With Watts still having ties to the Georgia office, I can easily see a scenario where Georgia doesn't have a spot for Ed Leslie but Hogan is able to get Watts to use him in Mid-South.