- September 11, 2019
Our coverage of 1975 continues with a look at the week ending September 14th: the Murdoch-Robley feud heats up, some unique stipulation matches in the smaller Mississippi towns, tracking comings & goings of wrestlers in and out of the territory & more! 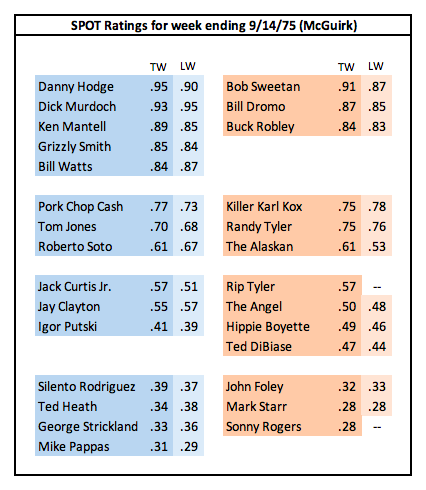 Notes/Analysis: As mentioned last week, Dick Murdoch defeated Buck Robley in loser leaves town matches in Tulsa and Shreveport, leading to Robley placing a bounty on Murdoch. This week, Bob Sweetan tried to collect the bounty in those two towns. The bounty was listed as $1,500. Tulsa and Shreveport were ahead of the rest of the territory, as different stages of the angle played out in other towns this week, In Jackson, the loser leaves town match between Dick and Buck took place. And in Lafayette, Murdoch was still a full-fledged heel, facing Bill Watts in a non-title match (the newspaper ad states that Murdoch refused to put the title on the line). With Robley & Killer Karl Kox also booked in Lafayette, I'd guess that they ran an angle during or after the Watts-Murdoch match to do the turn locally.

The other major towns were generally headlined by some combination of babyfaces Danny Hodge, Grizzly Smith and Ken Mantell. In Monroe, all three teamed up to defeat Bill Dromo & Randy & Rip Tyler in an elimination match. In Alexandria, Hodge & Grizzly downed Dromo & The Alaskan. Baton Rouge saw Grizzly beat Dromo in a Texas death match. Fort Smith and Wichita Falls were both headlined by Hodge vs Sweetan; Hodge won by disqualification in Wichita Falls while results are not available for Fort Smith. In North Little Rock, Hodge & Grizzly faced Dromo & Sweetan, while Lawton had Grizzly & Mantell against Dromo & Sweetan.

In the two smaller Mississippi towns, they ran some interesting stipulation matches from time to time. Pork Chop Cash took on Randy Tyler in Greenville this week in what was billed as a special challenge match. Tyler won by countout, which would lead to a rematch the following week in which the "deciding fall must be made inside the ring". Greenwood saw Pork Chop team with Jack Curtis Jr. to face Robley & the Alaskan in a return Texas tornado match with two referees, where one of the referees would be selected from the audience. I don't have any more information on how that played out, but it's fair to assume the fan was stationed outside the ring, or maybe it was a plant.

Rip Tyler is back here full-time, mostly teaming up with his "brother" Randy. The only other newcomer was Sonny Rogers. There are two wrestlers that used that name over the years. The more well-known Sonny Rogers was based out of Chicago and debuted in 1980. He was a fixture on AWA and WWF television in the 80s and early 90s. This Sonny Rogers was actually Laurie Hey, the real-life younger brother of Buddy Roberts. After wrestling for a couple of years in Canada, this Sonny came to Georgia in 1974 and had a run there followed by one in Florida. His name doesn't show up much for several months in mid-1975 before he started here as a prelim heel. A couple of years later, he would actually replace his brother as the tag team partner of Jerry Brown.

Leaving the territory were Vic Muehler, Frank Goodish and Tony Russo. As mentioned previously, Goodish next shows up in Amarillo. Muehler's whereabouts are unknown until he shows up as Vic Rossitani the following spring in Canada. He would return here in April 1977. Russo's next stop is believed to be as one of the masked Golden Hawks working for Gulas (his partner was Bill Ash). Russo would come back here for a brief stint in the summer of 1976.

Hiro Matsuda was out of the territory this week, so I removed him from the SPOT ratings chart. He returns next week. Matsuda spent about a week and a half away, defending the NWA World's Junior Heavyweight title in Houston against Al Madril, then going to Florida to defend it against several different wrestlers including Roger Kirby, Jim (aka J.J.) Dillon and Rick Gibson.

Women wrestlers Paula Kaye and Susan Green came in for the week, mostly working singles bouts against one another but also doing a mixed tag in Fort Smith. From that match, we can see that Green was the babyface, as she teamed with Jay Clayton, while Kaye teamed up with a heel (Ted DiBiase). Their SPOT rating for the week was a .69, so they were generally booked around the middle/upper middle portion of the cards, which was standard for the women at the time.