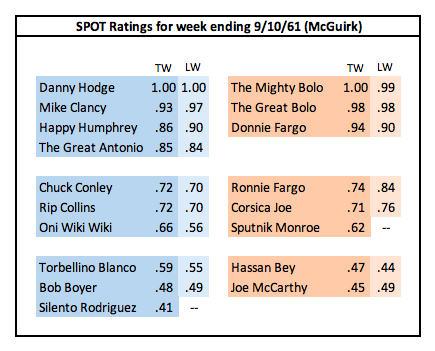 Notes/Analysis: Most of the Louisiana towns were not run this week. In Shreveport, it was announced as being due to the Labor Day holiday. In the previous Friday's New Orleans newspaper a card was announced for Tuesday the 5th, but that card did not happen.

The promotion continued to run a number of battle royals this week. Battle royals were advertised in Tulsa, Little Rock, Fort Smith, Springfield and Ada. As in the past, the royals featured either Great Antonio or Happy Humphrey, but the two big men were never in the same battle royal.

Newcomers this week were Sputnik Monroe and Silento Rodriguez. This was Sputnik's first stint in the territory. In some towns he was billed as Rocky "Sputnik" Monroe, in others just Sputnik Monroe. He had been wrestling in Gulf Coast prior to coming here. Silento had been wrestling in East Texas; like Sputnik, this was his first run here. Silento, who was legitimately both deaf and mute, came to the U.S. in 1959 after spending a few years wrestling in Mexico.

Leaving the territory were Jack Curtis Jr. and Nelson Royal. Curtis' name only shows up sporadically over the next few years around Louisiana and Mississippi, but it's possible he was working behind the scenes in those states. Royal went to Portland, where he wrestled as Baby Face Nelson; he would return here in 1964.