- September 27, 2019
Our coverage of 1961 continues with a look at the week ending October 1st: Sputnik moves into the upper orbit of the cards, two newcomers bring some international flavor, who the heck is Rough House Grogan & more! 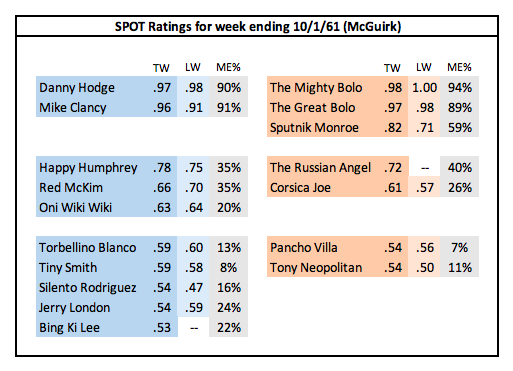 Notes/Analysis:  I made a minor modification to how I calculate the "Main Event %" so that it mirrors the way I calculate the SPOT ratings. Both now use a weighted five week rolling average.

Donnie & Ronnie Fargo left the territory after Donnie lost a few loser leaves town matches last week. I believe they both went back up to Pittsburgh for a month, and then started in east Texas as the Dalton brothers (Jack & Jim). With the Fargos leaving, this gave Sputnik Monroe an opportunity to move up the cards. He faced Mike Clancy in main events in Little Rock, Wichita Falls and Oklahoma City. In Little Rock, both men were disqualified. in Oklahoma City, Clancy won the match, which was billed as having two referees. The ad promoting the OKC card also mentions an angle on TV where the two men brawled with Sputnik losing his clothes in the process.

Sputnik also interjected himself in the biggest match of the week, Danny Hodge defending the NWA World's Junior Heavyweight title against Clancy in Springfield. After splitting the first two falls, Sputnik came to ringside and issued a challenge to either or both. As the match resumed, he stayed at ringside. When Clancy missed a tackle and sailed through the ropes to the floor, Sputnik attacked him with a chair. Clancy was deemed unable to continue and Hodge was awarded the match.

In addition to the Fargos, The Great Antonio and Jack Curtis also left the territory. Antonio next appears in east Texas in October. He would return here for a week later in the year. Curtis' next known whereabouts are in Mississippi in early 1962.

Coming in were two newcomers, The Russian Angel and Bing Ki Lee. The Russian Angel, also billed as Mr. K, was Tony Angelo. Angelo had wrestled all over the US and Canada dating back to the late 30s, but had just started using this gimmick earlier in the year for Al Haft. He came here from the Doyle/Barnett AWA circuit. Lee, real name Felipe Hahn Lee, was of Korean descent but had been born in Mexico. He was a bodybuilder before becoming a wrestler. After wrestling as Felipe Ham Lee in Mexico for the first couple of years of his career, he came to the US and worked as Bing Ki Lee. He came here after a run in Portland.

In addition to the shows listed above, Danny Hodge and Torbellino Blanco were booked in Paris, TX on Thursday. Paris had been run a few times earlier in the year using McGuirk talent, but I'm not positive that this particular card was a "McGuirk show". The other two wrestlers advertised were Rough House Grogan and Jody Hamilton. I haven't seen a single mention of a Rough House Grogan anywhere but for this one show. And Hamilton couldn't have been the Jody Hamilton (aka The Assassin) most readers are familiar with, as that wrestler was in Florida at this time wrestling as Joe Hamilton.