- September 25, 2019
Our coverage of 1975 continues with a look at the week ending September 28th: Jack Brisco gets a hero's homecoming in Tulsa, it's (not quite) hammer time for one newcomer, is Kox _really_ just an upper midcarder & more! 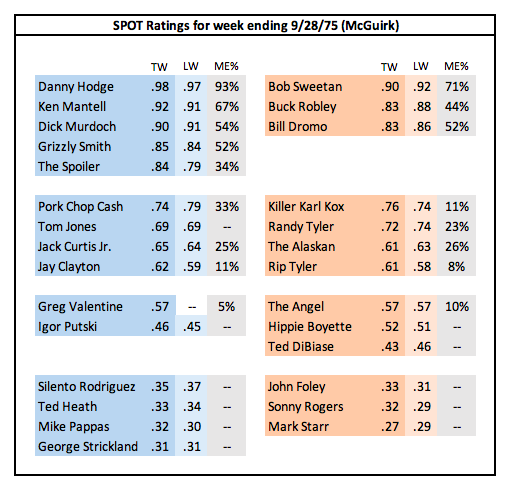 NWA World Heavyweight champion Jack Brisco came in for the week, including a huge title defense against Danny Hodge in Tulsa. It was billed as Brisco's first appearance back in Oklahoma since winning the title (July 20th 1973). I haven't gone through all of my Oklahoma records from late 73 through the first half of 75, but I believe this was true. Brisco of course grew up in Oklahoma, was a collegiate wrestling champion at Oklahoma State and got his start in 1965 for McGuirk, so him coming back to the area as the World Heavyweight champ was a pretty big deal.

Brisco also faced Hodge on the Saturday show in Alexandria. Alexandria was typically a Tuesday night town, but was run twice this week (it would not be run next Tuesday), presumably so they could get a date on the champ. Brisco also took on The Spoiler in Shreveport and Baton Rouge, defeating him in title bouts both nights. He also successfully defended against Dick Murdoch in Chalmette.

Bill Watts spent a couple of weeks in Georgia. World's Junior Heavyweight champ Hiro Matsuda is absent from the cards for a couple of weeks, and I haven't been able to pinpoint his whereabouts, so he may have been injured or given a (rare) vacation. Both have been removed from the SPOT ratings chart in their absence.

Coming in this week was Greg Valentine. Greg came in from Southern California, where he had been a heel aligned with Buddy Roberts & Jerry Brown and manager Sir Oliver Humperdink. Here, he was brought in as a babyface, facing Bob Sweetan in Tulsa and teaming with Dick Murdoch against Sweetan & Killer Karl Kox the next night in Shreveport.

The Spoiler finished up his two-week run here. He was primarily used as a babyface, but in Tulsa he was Buck Robley's bounty hunter in a match against Murdoch. He also faced Kox in Chalmette. Speaking of Kox, it's interesting to look at his SPOT rating. It's .76, placing him in the upper mid card below the main event level of heels: Sweetan, Robley and Bill Dromo. He is usually in a tag team match second from the top in the A towns, while Sweetan or Robley are in a singles main event. Dromo is mostly main eventing the B towns. I have a feeling that to a fan watching the TV show and/or otherwise following the product in 1975, Kox was the "lead heel". But the way the cards are structured, his SPOT rating doesn't reflect that. Based on what I know is coming over the next several weeks, the idea seems to be that Murdoch had to go through Robley and then a succession of bounty hunters before finally getting a match with Kox.

Kox also faced a new foe this week. Young Ted DiBiase, who I mentioned last week was about to turn babyface, took on Kox on the Saturday Alexandria show. I did a little research during the week and found an interview with Ted where he mentioned that he was billed as Murdoch's protege around this time. So with Murdoch turning babyface a few weeks back to feud with Kox, that helps explain how the turn likely unfolded. In Ted's book, he mentions a TV angle where he subbed for an injured Danny Hodge to take on Kox. I believe that happened later on, as it takes place after Kox "blinded" Murdoch in an angle, which I think (from looking at house show lineups) was in October.

There are two listings for Kosciusko this week, one on Monday and one on Friday. I believe these were both fair shows. Each one featured just four wrestlers, with two one fall singles bouts followed by all four men coming back for a 2 out of 3 falls tag team match as the main event. This happened more often than you might think in some of these smaller towns, not just for spot shows but even some of the weekly towns. That same night in Greenville, six wrestlers filled out the card, which was typical for that town. Pork Chop Cash teamed with Jack Curtis Jr. to face The Alaskan & The Angel, plus Randy Tyler faced Mike Pappas, and there was one prelim involving two of the guys in the tag match.

A quick note on Buck Robley. I've talked about him losing to Dick Murdoch in loser leaves town matches in several different towns over the last couple of weeks (and there's one in Fort Smith this week). However, he is still being booked as a wrestler a couple of times a week in the towns were they didn't run that angle. So I still consider him a member of the full-time roster.