- September 21, 2019
Our coverage of 1961 continues with a look at the week ending September 24th: Donnie Fargo competes in several loser leaves town matches, McGuirk runs Jackson MS for the first time, a couple of Hillbillies leave and are replaced by a 6'10" 300+ pounder named "Tiny" & more! 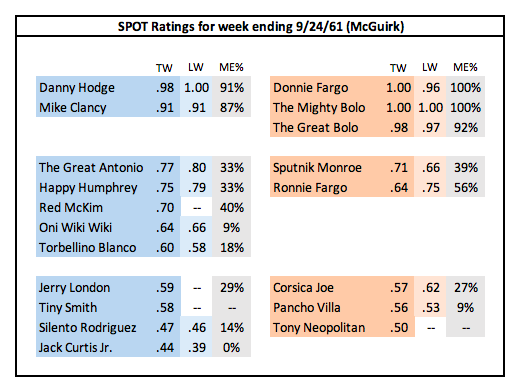 The major storyline this week was Donnie Fargo (and by association, his "brother" Ronnie) in loser leaves town matches in several cities on the loop. In both Tulsa and Wichita Falls, he took on Danny Hodge in such a match. These bouts were also for Hodge's NWA Worlds Junior Heavyweight title, with Ronnie handcuffed at ringside. While results for these shows are not available, it's safe to say Donnie came up on the short end of the stick. In Little Rock and Oklahoma City, Donnie's opponent for the loser leave town matches was The Great Bolo. No results for OKC, but in Little Rock Bolo won the match. In Springfield, Donnie teamed with Ronnie to face Hodge & Torbellino Blanco, with the Fargos vowing that if they lost, they would leave town. They did, and they did.

Shreveport this week was headlined by a Russian roulette-style battle royal. The last two in were Great Bolo and Mike Clancy, so they came back for the main event which was won by Bolo. Attendance for the card was "a reported 900 fans". In New Orleans, Great & Mighty Bolo teamed up to beat Clancy & The Great Antonio.

The promotion ran Jackson, MS for what looks to be the first time this week. The town had been run by Nick Gulas at one point, with his last card there having been in February 1961. McGuirk would run it weekly for a couple of months. At this time, many of the arenas in the south were still segregated. I believe that was the case in Jackson, as the ticket prices include a separate tier for "colored" fans.

The Scufflin' Hillbillies (Chuck Conley & Rip Collins) finished up their short run here last week, as did Joe McCarthy. McCarthy went to work for Gulas, and would return here in January 1962. The Hillbillies start for the Doyle/Barnett AWA circuit in November, with Conley spending October in Gulf Coast teaming with Cousin Alfred and Collins working at least one shot for Central States.

Newcomers this week were Jerry London and Tiny Smith. Returning to the SPOT ratings were Red McKim and Tony Neopolitan, with both being advertised regularly enough to be considered "regulars". London came in from Amarillo for what would be his first stint in the territory. Tiny (aka Grizzly Smith, father of Jake Roberts) had been here for a few months earlier in the year and returned after a stint working for the Doyle/Barnett AWA circuit.