- September 09, 2019
Our coverage of 1982 continues with a look at the week ending September 12th: JYD takes some time off, a look at the current titleholders in the territory, the Grappler returns, Robley wants Akbar & more! 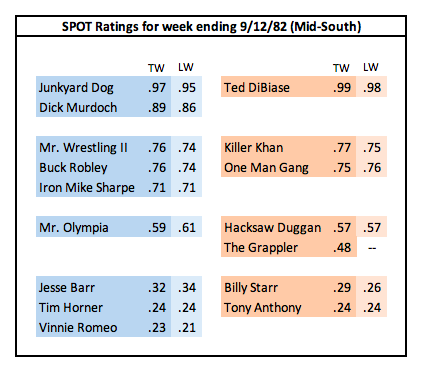 Notes/Analysis: Junkyard Dog main-evented New Orleans in a non-title dog collar match against North American champ Ted DiBiase. JYD won the match, but was not booked the rest of the week. Not sure if there was an injury angle on TV or they just gave him a little time off to rest, but DiBiase spends most of the rest of the week facing Mr. Wrestling II. They faced off in title bouts in Baton Rouge, Jackson and Biloxi. In Shreveport, DiBiase teamed with Hacksaw Duggan to face Buck Robley & Dick Murdoch in the main event.

Also in Shreveport, Iron Mike Sharpe fought Killer Khan for the Louisiana state title. Title histories show that Sharpe won the title from Khan on the August 18th TV taping in Shreveport. As mentioned previously, Khan was the Mississippi state champ at this time. The other championship recognized in the territory was the Mid-South Tag Team titles held by JYD & Mr. Olympia. However, with JYD feuding with DiBiase, those titles were not defended much at this time. Olympia was booked in five singles bouts this week, facing Duggan twice and also facing One Man Gang, Tony Anthony and Billy Starr once apiece.

After leaving the territory in mid-July for a New Japan tour, The Grappler (Lynn Denton) returned this week. He was booked against Jesse Barr in Shreveport. He had actually spent a couple of weeks in Southwest once the Japan tour ended, then came back here. Ernie Ladd also returned for one shot in Baton Rouge against Duggan. Ladd was nearing the end of a twenty-plus year career as a wrestler. He would have a brief stint in Florida later in the year, then take much of 1983 off before going to Crockett for a big run the first half of 1984, then coming back here for his final in-ring run.

The other major feud making its way through the house shows was that of Buck Robley and Scandor Akbar. Akbar was managing One Man Gang and Killer Khan, and this week Robley teamed up with Iron Mike Sharpe to face Akbar's men on three separate occasions (Baton Rouge, Jackson and Biloxi). In each match, the stipulation was that if Robley's team won he would get five minutes with Akbar. I don't have results from those matches, but  New Orleans had a Robley-Gang singles bout with the same stipulation. Buck won that bout and then went on to beat Akbar by DQ in their five-minute match.