- September 16, 2019
Our coverage of 1982 continues with a look at the week ending September 19th: DiBiase continues to face all comers, a couple of guest appearances in OKC, the son of a former World champ comes in & more! 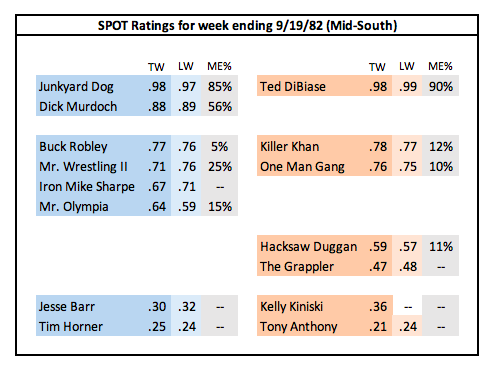 For new readers, this post and this post will help you understand what the SPOT rating means.

On the three shows I have records for this week, North American champion Ted DiBiase faced different opponents on each. In Loranger he was booked against Dick Murdoch. In Oklahoma City, he defeated Buck Robley. In Monroe, he lost to Junkyard Dog in a dog collar match. Presumably the Monroe bout was non-title, but I'm not sure about the other two matches. Another possible title match took place in Oklahoma City, as reigning tag champs JYD & Mr. Olympia defeated One Man Gang & Killer Khan.

Monroe also featured Robley & Iron Mike Sharpe against Gang & Khan with the same stipulation we saw in a few towns last week. If Robley's team won he would get five minutes with Gen. Scandor Akbar. Robley & Sharpe won this bout, and Robley "won" his match with Akbar when Akbar ran away after four minutes.

A couple of interesting names are listed in the results from Oklahoma City. Brad Armstrong lost to The Grappler and The Super Destroyer lost to Mr. Wrestling II. Both men were working in Georgia at the time. I do want to note that Georgia results on wrestlingdata.com list Super D on a show in Columbus, GA the same day as the OKC show. One of the more maddening aspects of trying to come up with a complete and accurate history of shows and results is when a masked wrestler appears in two different towns on the same night.

Vinnie Romeo and Billy Starr are not booked on any of the house shows this week. In Romeo's case, it looks like he's taken off the road for a few weeks but still works the bi-weekly TV tapings in Shreveport. Starr leaves the territory and his name pops up on a couple of shows in Georgia and Florida over the next few months.

The only newcomer this week is Kelly Kiniski. Son of former NWA World Heavyweight champ Gene Kiniski, Kelly had a previous stint here in the spring of 1981. This time around, he came here after a stint in Mid-Atlantic. Kelly had debuted for Stampede at the age of 20 in August 1980. After several years of competing in various territories, he retired in 1987.