- September 01, 2019
Our coverage of 1982 continues with a look at the week ending September 5th: some interesting insight into how much travel some of these guys had to endure, JYD squares off with DiBiase four more times, Assassin & Ellering leave & more! 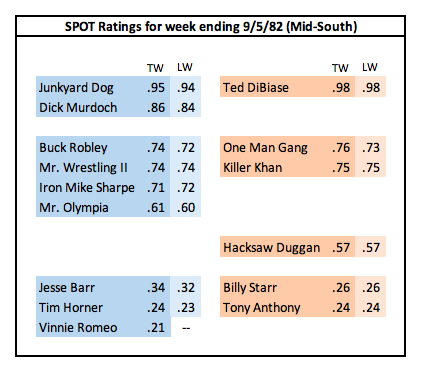 Notes/Analysis: The Super Destroyer comes in for the weekend on loan from Georgia. He worked a TV taping at the TBS studio Saturday morning, then worked Junkyard Dog that night in Lake Charles (which is 650 miles away so he had to have flown). The next day he worked both the Alexandria and Monroe cards against Mr. Wrestling II. After that, he worked Monday night in Muskegon, MI with the rest of the Georgia crew, and again in Michigan on Wednesday (probably with a show in the area on Tuesday as well). His next known booking was that Saturday night in Chattanooga. That's a lot of travel!

Kevin Von Erich and Magic Dragon finish up their two-day stop here on Monday in Oklahoma City. Bob Roop also worked that show, losing to Dick Murdoch. Roop would make a handful of appearances here throughout the remainder of the year, but not as a regular. Rick Harris (later known as Black Bart) finished up his stint as a full-timer here last week, though he too would make sporadic appearances over the next couple of months before starting in Mid-Atlantic in late October.

Also leaving the territory were The Assassin (Jody Hamilton) and Paul Ellering. It appears Assassin's last match here was the previous Monday against Iron Mike Sharpe in New Orleans, while Ellering's last booking was a few days later in Biloxi against Hacksaw Duggan. The Assassin may have gone to Puerto Rico, but there's not a whole lot of info out there on his whereabouts until early 1983 when he's in Georgia briefly and then Southeastern (where he worked as The Flame). Ellering may have been injured, as there are some sources out there that mention a severe knee injury occurring at some point in 1982. He does show up in Portland for a couple of weeks in October and next shows up as a wrestler in Georgia in early 1983. The nagging knee injury was enough to end his career as a full-timer in the late spring, at which point he transitioned into being a manager, which certainly worked out well for him.

Vinnie Romeo is booked on enough cards between this week and next to be considered a "full-timer" and returns to the SPOT ratings.

Junkyard Dog squared off with Ted DiBiase in Oklahoma City, Lafayette, Alexandria and Monroe. The Lafayette and Monroe matches were both advertised as title bouts. The Alexandria ad does not specify whether or not it was a title bout and the results I have from OKC also don't specify. DiBiase faced Buck Robley in a lumberjack match in Little Rock, but again I'm not sure if it was a title match. DiBiase did defend the title against Mr. Wrestling II in Lake Charles.