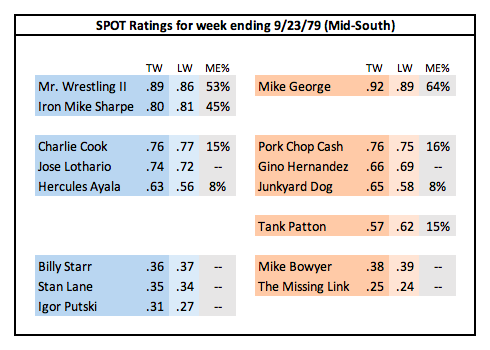 Both Bill Watts and King Kong Mosca were not booked on any cards this week, so they are not listed in the SPOT ratings chart above. Both return next week. Watts did work the Omni in Atlanta on Friday night for Georgia Championship Wrestling but I have not found any other bookings for him or Mosca anywhere else during the week. Jake Roberts is absent from the cards this week as well, but he will be gone for a few weeks. I have no information on his whereabouts so he may have been injured.

Dick Murdoch came in to work Shreveport, where he beat North American champion Mike George by disqualification. According to Tim Hornbaker in his book Death of the Territories, Murdoch & Blackjack Mulligan had purchased the Amarillo territory from the Funks in October 1978 (it should be noted that some online sources differ on when the sale took place, but Tim's research is generally impeccable). In addition to headlining in his own territory, Murdoch was taking outside dates in East Texas and would continue to show up here occasionally. It's been said that both Bill Watts and Ron Fuller used the payoffs they would get from main eventing shows in other territories (Florida, Georgia and Memphis) to help keep their own territories afloat when they first started up. This may have been a similar situation.

Mike George also defended his title against Mr. Wrestling II on at least three occasions, in Baton Rouge, Lafayette and Monroe. A fourth title defense may have also occurred as George faced II in New Orleans, but I'm not sure if that was a title match. George took on Iron Mike Sharpe in a lights out match in Alexandria. Sharpe, the Louisiana state champ, defended against Junkyard Dog in Baton Rouge. Another major match on that card saw Charlie Cook face Pork Chop Cash in a Texas death match. Other notable matches this week saw Sharpe face Mr. Wrestling II in a rare face vs face match in Shreveport, and Sharpe took on Tank Patton in a lights out match in New Orleans.

The two biggest movers on the SPOT ratings chart this week were Hercules Ayala and Junkyard Dog, both of whom moved up over the .60 mark. I use .60 as a cutoff to separate upper mid-carders from mid-carders, so this would indicate both moving to upper mid-card status.

Leroy McGuirk ran just once this week, on Monday in Tulsa. He will add a second show next week. At that point I will start covering his territory in a separate post and look at SPOT ratings. This week's card was headlined by Sugar Bear Harris (Jim "Kamala" Harris) & Oki Shikina taking on Mike George & Troy Graham. There was also a tournament match for the Junior Heavyweight title between Brian Blair and Pork Chop Cash. Keep in mind that both George and Pork Chop were full-time for Watts, but came in to work this show (and while I don't have full results, I did look up newspaper results from this show and verified that George and Pork Chop did appear). This is similar to the Tulsa card two weeks ago, where it was the Watts crew plus three wrestlers that were going to stay in Tulsa and work for McGuirk (Blair, Graham and Sugar Bear). I really can't speculate as to why this happened, and I don't really want to rehash all the various stories regarding the split. So we'll just note that two of Watts' guys worked for McGuirk this week and leave it at that.

Also booked in Tulsa this week were Frank Dusek and Tom Jones, both of whom came in from East Texas. This was the second week in a row that Fritz Von Erich supplied talent to McGuirk as he tried to get his "new" territory off the ground.
1979 Mid-South 1979 Tri-State