Analysis/Notes: Joe Louis continued his two-week stint in the territory. For the most part, he worked in the towns that he did not work last week. In Shreveport, he was special referee for Danny Hodge's title defense against Jack Donovan. The show was moved to a different venue, the Hirsch Youth Center at the Louisiana State Fairgrounds, and attendance was reported as 6,000. Louis refereed Hodge vs Donovan again the next night in Little Rock with a reported attendance of more than 3,500 and over 1,000 fans turned away. In Wichita Falls, Louis refereed a match pitting Hodge & Lorenzo Parente against Chati Yokouchi & Mr. Ito. The next night in Oklahoma City, he took part in a 10-round boxing match against Karl Von Stroheim, winning via knockout just 31 seconds into round one.

The major matches this week continued to fall into two general categories: Hodge against Donovan, sometimes with Parente and Ronnie Reed joining them for tag matches or having separate singles bouts, and various combinations of babyface triumvirate Gorgeous George Jr, Haystack Muldoon and Jerry Kozak against various combinations of Yokouchi, Ito and Von Stroheim. Los Diablos found themselves in a couple of main events as well this week, against Hodge & Parente in Fort Smith and against Muldoon & Kozak in Longview.

There were no changes to the roster this week, and minimal changes in the SPOT ratings. Yokouchi & Ito did see their SPOT ratings increase as their feud with George, Haystack & Kozak were usually main events on the shows Hodge wasn't working. 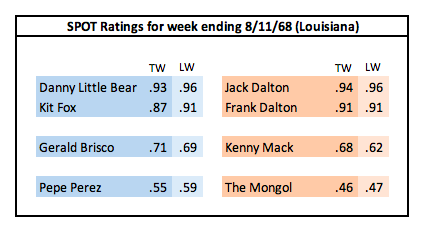 The Daltons were billed as the Louisiana state Tag Team champions, defending the belts against Gerald Brisco & Pepe Perez in Loranger and against Danny Little Bear & Kit Fox in Alexandria. The Louisiana Heavyweight championship was to be decided in a battle royal in Lafayette, which was won by Little Bear.

No changes to the crew this week. In addition to the full-timers, Oni Wiki Wiki and Buddy Austin were booked in Loranger. Jack Donovan & Ronnie Reed were booked in Chalmette along with Gorgeous George Jr; as I mentioned last week the Chalmette shows often featured a few of the guys from the main circuit.