- August 28, 2019
Our coverage of 1975 continues with a look at the week ending August 31st: NWA World champ Jack Brisco passes through, Dick Murdoch might need to find some new friends, three new faces come in from Memphis & more. 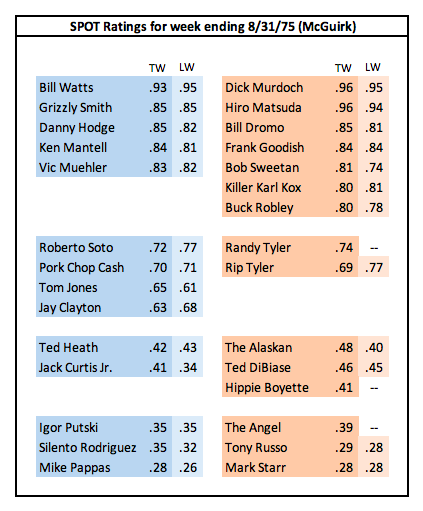 Notes/Analysis: NWA World Heavyweight champion Jack Brisco came to the territory this week. With the World champ in town, they ran the Municipal Auditorium in New Orleans instead of their regular venue in Chalmette (just outside New Orleans). Brisco defended the belt in New Orleans and Jackson against Dick Murdoch, and in Shreveport he took on NWA World's Junior Heavyweight champ Hiro Matsuda. While it may seem odd for the Junior champ to get a Heavyweight title shot, that happened regularly in this territory over the years due to Danny Hodge being the top drawing card in the area. In Shreveport, Brisco pinned Matsuda in 23 minutes. His appearances here were bookended by bouts in Georgia; he teamed with brother Jerry against Dick Slater & Bob Orton Jr on the 25th in Augusta and defended the title against Bob Backlund in Atlanta on the 29th.

Another title match took place in Jackson, as Dick Murdoch defended the North American title against Bill Watts. Watts won by disqualification, so the title didn't change hands. But the big news came immediately after the verdict, as Killer Karl Kox, Buck Robley & The Angel, who had initially come to the ring to help Murdoch, all jumped on him afterwards. The Watts-Murdoch match also took place this week in Tulsa, and looking at the following week's card I believe the same post-match angle happened there as well (though it would have been just Kox & Robley jumping Murdoch, as The Angel was not booked in Tulsa). This would lead to Murdoch turning babyface.

Other title matches during the week saw Matsuda defend the World's Junior title against Danny Hodge in New Orleans and Wichita Falls, against Ken Mantell in Lawton, and against Roberto Soto in Baton Rouge.

The Angel was one of three newcomers to the full-time roster this week, the others being Randy Tyler and Hippie Boyette. Interestingly enough, all three of them had been wrestling for Nick Gulas just prior to coming here. The Angel was Frank Morrell, who had been wrestling in various southeastern territories since 1967. This was his first run in Tri-State, and it was also the debut of The Angel gimmick. Later on in other territories he would be called The French Angel. Randy Tyler had been here a few times in the past, usually teaming up with "brother" Rip Tyler. Hippie Boyette was of course Mike Boyette, and this was his second stint in the territory with the first being over 5 years prior.

Leaving the territory were Ivan Crnkovic and Mitsuo Hata. Crnkovic went to British Columbia. He spent the next couple of years working for Canadian territories as well as on a handful of AWA cards in Winnipeg (and at least one in Chicago). Hata went to Florida, and would spend a couple more years in the U.S. before returning home to Japan, where he worked as Rocky Hata mostly for All Japan.

While Frank Goodish continued to appear in advertisements for shows this week, the results for Monroe say he was injured and did not appear. In Wichita Falls, he was advertised for a tag team match teaming with Bob Sweetan against Ken Mantell & Jay Clayton; results list Mantell as wrestling Sweetan in a singles match, so it's possible he didn't appear on that show either. The same thing happens next week: he's advertised for a few shows but the ones I have results for don't have him appearing. His next known bookings are in early October in Amarillo, so it's possible he did suffer a legitimate injury as he was finishing up here.