- August 22, 2019
Our coverage of 1961 continues with a look at the week ending August 27th: the Fargos headline one crew while the Bolos headline the other, what exactly is a Russian roulette style battle royal, how does one get a perfect 1.00 SPOT rating & more. 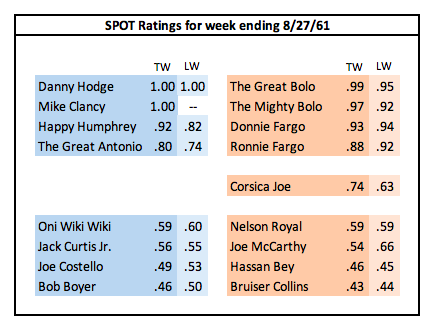 Notes/Analysis: The main events this week mostly fell into one of three categories: some shows had Donnie & Ronnie Fargo in the main, some had Great Bolo & Mighty Bolo in the main, and some had a battle royal advertised.

The Fargos worked against Hodge & the Great Antonio in Tulsa and Springfield and Hodge & Mike Clancy in Little Rock. The Bolos faced Happy Humphrey & Jack Curtis in Shreveport, Humphrey in a handicap match in Monroe, and Humphrey & Clancy in New Orleans.

Wichita Falls and Oklahoma City had battle royals featuring the Great Antonio and several other members of the crew. These were "Russian roulette" style in that no other matches were advertised, and the order of elimination from the battle royal determined the singles matches that took place afterwards. There were usually an odd number of competitors and the first person eliminated would "go home without pay" and not have a match afterwards. The second man eliminated would face the third, fourth eliminated would face the fifth, and so on. What's interesting to note is that with all the battle royals this week and last week, the two big men (Antonio and Happy Humphrey) were never both in the same battle royal.

In addition to the full-time crew listed in the SPOT ratings, Al Galento worked against Corsica Joe in Fort Smith. Also, Tony Neopolitan worked a couple of the Louisiana cards. He was likely part of the "office" for New Orleans promoter Joe Gunther, as even when the McGuirk crew stops working the lower part of the state later in the year, Neopolitan continues to work for Gunther in those towns.

After not being booked on any shows last week (and only Monday and Tuesday of the week prior), Mike Clancy returns to the SPOT ratings this week and finds himself with a perfect SPOT rating of 1.00, one of two wrestlers to do so this week. The SPOT ratings are based on a rolling five-week period, so this means that he was in the main event of every card he was booked on this week as well as the two weeks prior and the two weeks following. He replaces Red McKim on the full-time roster, as Red makes only sporadic appearances in the territory over the next month or so.