- August 20, 2019
Our coverage of 1975 continues with a look at the week ending August 24th: we run through main events and other important matches from the 11 shows we have data for this week, look at four newcomers to the territory & more. 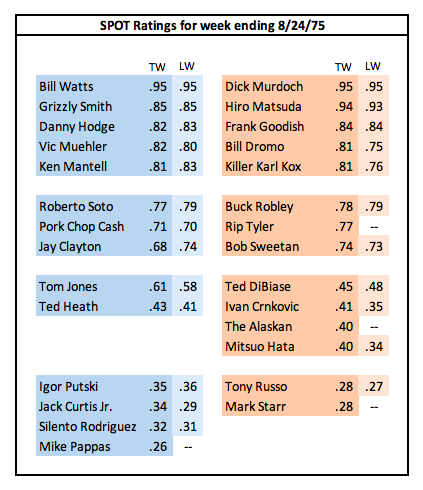 Notes/Analysis: There weren't much changes in the makeup of the cards this week as compared to last. Bill Dromo's SPOT rating increased slightly as he continued to get a push after turning heel. Killer Karl Kox also saw his rating increase, due to him & Dick Murdoch winning the US Tag Team titles at some point the previous week and defending them on the road this week. Conversely, former (half) Tag Team titleholder Jay Clayton saw his SPOT rating decrease as his team with Danny Hodge is no longer a regular team.

Here's a look at the main events in all of the towns this week, along with other notable bouts:
-Monroe was headlined by Grizzly Smith vs Frank Goodish
-Tulsa had a Murdoch & Kox title defense against Bill Watts & Clayton on top, with a Hodge vs Buck Robley Texas rules match (aka Texas death match) underneath
-Alexandria saw Hiro Matsuda defend the NWA World's Junior Heavyweight title against Ken Mantell
-Shreveport had Murdoch & Kox defending the tag belts against Watts & Hodge
-Baton Rouge was headlined by Grizzly & Roberto Soto vs Dromo & Rip Tyler
-Fort Smith had Watts vs Goodish on top with Mantell vs Bob Sweetan in a Texas rules match as the semi
-Jackson had Murdoch & Kox against Vic Muehler & Clayton in a tag title match plus a Matsuda defense against Hodge
-Chalmette had Grizzly vs Dromo in a lumberjack match plus Muehler & Clayton vs Murdoch & Kox (which isn't specifically listed as a title match, but may have been)
-Greenville saw Matsuda defend the Junior title against Pork Chop Cash
-Greenwood had Muehler vs Robley in a lumberjack match
-Loranger was headlined by a battle royal plus Tom Jones vs Goodish

Newcomers this week were Rip Tyler, The Alaskan, Mark Starr and Mike Pappas. Tyler wasn't technically a newcomer, as he had been booked on a handful of cards over the previous few weeks, and did at least one unadvertised run-in last week, but this is the first week where I consider him part of the full-time crew. Rip had been in Gulf Coast for most of the year before coming here.

The Alaskan was Mike York, who came here from Amarillo. A couple of other wrestlers, Frank Monte and Jay York, have used the Alaskan name over the years, and both were partners of Mike's at various times. Since I'm thorough, I looked up their whereabouts at this time to help "prove" to myself that this Alaskan was indeed Mike York. Frank Monte was in Mid-Atlantic at the time and Jay York was in Grand Prix at the time, so I feel pretty confident in saying it was Mike.

Mark Starr was Ricki Starr's brother, and wrestled as Mark Starr, The Mongol, and Joe Kono depending on the territory. Mike Pappas had been in Florida earlier in the year, and I found one result for him in Australia over the summer.

Ronnie Paul, who passed away last week, was still listed in the ads for Shreveport and Fort Smith this week. I only mention this as it gives some insight into how far in advance the ads might have been prepared. Jerry Miller left the territory after losing a couple of loser-leaves-town matches the previous week. I don't have any info on his whereabouts after leaving here until early in 1976 when he is working for Gulas as Duke Miller.