- August 15, 2019
Our coverage of 1961 continues with a look at the week ending August 20th: 6'5" 450 pound The Great Antonio is NOT the largest man in town, the promotion runs a stacked outdoor show at a larger venue in OKC, Hodge squares off against Donnie Fargo a few times & more. 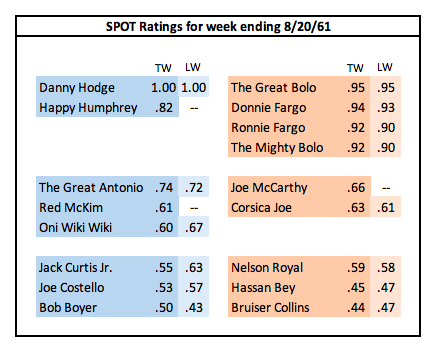 Notes/Analysis: Billed at 450 pounds (which seems to be pretty accurate based on other reports I could find about his life and career) and standing at 6'5", the Great Antonio was a big man. But this week an even bigger man comes in to the territory, the 762-pound Happy Humphrey. Humphrey's name has recently resurfaced in wrestling circles due to the passing of Harley Race. In 1960, at the very beginning of Harley's career, Humphrey hired him as a driver, assistant, and occasional opponent. I don't know for sure if Harley was driving Humphrey around during this particular run, but it is very possible as I can't find records for Harley wrestling anywhere else at the time under any of his known ring names. Humphrey had been in Central States from April to early July before coming here. He had a previous stint in this territory in the fall of 1960, coming in for about a week.

With two very big men in the territory, it seems only logical that the promotion would have battle royals on at least some of the cards. And indeed they did. Shreveport, Monroe, New Orleans and Fayetteville all hosted battle royals during the week. At this point in time, the battle royals were usually of the "Russian roulette" variation, in which the royal was the first match on the card and the remaining matches would be determined by order of elimination. The Shreveport card is also notable because semi-retired wrestler Bob Clay took over the reins as local promoter from Leo Voss beginning this week.

In Oklahoma City, the card was held at the Fairgrounds Grandstand instead of regular venue the Stockyards Coliseum. The Fairgrounds was a much larger outdoor venue, with the local newspaper listing capacity as 10,000 seats. The card was loaded, including Danny Hodge defending the NWA World's Junior Heavyweight title against Sonny Myers. Myers, a Central States mainstay, had numerous runs here over the course of his career, including one earlier in 1961, but this was a one-off appearance. Also on the card was a heel vs heel match with Donnie & Ronnie Fargo facing Great Bolo & Mighty Bolo and a women's match advertised as Lorraine Johnson vs Millie Stafford, though results list Kathy Starr subbed for Johnson.

Hodge defended the title on at least one other occasion during the week, against Donnie Fargo in Tulsa. He also faced Fargo in Wichita Falls, though the ad for that match doesn't mention if the title was on the line or not. Hodge and Donnie were on opposing sides of two tag team bouts during the week as well, with Donnie & "brother" Ronnie Fargo facing Hodge & Al Galento in Little Rock and Hodge & Red McKim in Springfield.

The only attendance number I have for the week was Monroe, where the newspaper listed the crowd as "over 600".

After not being booked on any of the cards I have data for last week, both Red McKim and Joe McCarthy returned this week. Mike Clancy did not have any bookings here during the week, so he is not listed in the SPOT ratings above, though he will return next week. Myers, Galento & the women wrestlers were the only non-full-time members of the crew this week.