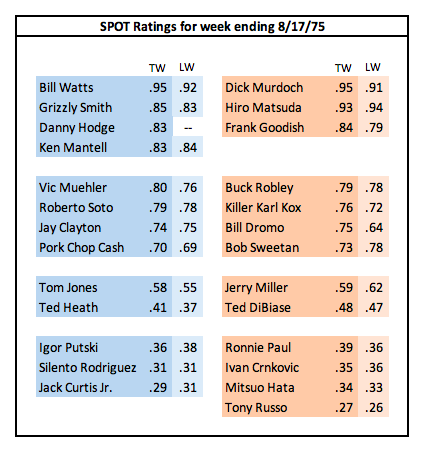 Notes/Analysis: Bill Watts and Dick Murdoch battled over Murdoch's North American title twice this week, in Tulsa and Shreveport. In Shreveport, the two went to a double disqualification when pretty much the entire undercard ended up in the ring during the match.

Another main event feud featured Grizzly Smith and the recently-turned-heel Bill Dromo. The two faced off in a chain match in Baton Rouge (with Dromo winning due to outside interference) and were on opposite sides of a tag team match in Alexandria.

There appears to have been a title change during the week, as Danny Hodge & Jay Clayton defended the titles against Murdoch & Killer Karl Kox in Jackson and Chalmette. Results from Jackson, where the match was advertised as a title bout, are unavailable. The Chalmette newspaper lists Murdoch & Kox as winning the bout, but doesn't specifically mention whether or not the titles were on the line. The following week, Murdoch & Kox are billed as champions in an advertisement for the next show in Jackson. So a title change likely occurred this week in either Jackson or Chalmette (or possibly both, though I don't think they repeated title changes in multiple cities at this point in time).

Other title bouts advertised during the week saw Hiro Matsuda defend the NWA World's Junior Heavyweight title in Shreveport against Roberto Soto (with Matsuda winning and retaining) and in Fort Smith against Ken Mantell.

In Monroe, Pork Chop Cash & Tom Jones faced Jerry Miller & Ted DiBiase with the stipulation that whoever loses the final fall (it was 2 out of 3 falls) must leave town. The same stipulation was in effect in Loranger when Miller & Frank Goodish faced Jones & Soto. Pork Chop & Jones won the Monroe bout, with Miller being pinned in the third fall. Results from Loranger are not available, but it's safe to say Miller ended up the loser in that one as well.

Preliminary wrestler Ronnie Paul (Ronald M. Paul, 40 years old, of Charlotte NC per newspaper reports) was killed in a traffic accident on Tuesday afternoon while on his way to the show that night in Alexandria. The driver of the other car was charged with failure to yield the right-of-way. Paul had just returned to the territory the previous week. He mostly wrestled throughout the southeast over a 10+ year career.

Stan Hansen finished up his run the previous week, though it actually appears he may have finished up the week prior. He was advertised for four shows last week, but I have results for three of those shows and various wrestlers subbed for Stan in all three. He starts in Amarillo in early September, and would return here in 1977.